Walking in the Rain

I have the same room in the hostel as I did four years ago, but I’m not all that happy with it.  The ventilation is lousy and even when it’s cool outside, the room gets all the hot air from the lower rooms. I didn’t bother with the blanket and only noticed the fan in the corner this morning.  One problem is that the two windows that open only open at the top and they open onto the central courtyard of the hostel, which has a lot of noise in the evening.  I actually closed the window, but it didn’t seem to make a difference with the sound.  This morning I noticed that I had only closed one of the two windows (and it was the smaller of the two), hence the lack of any effect.  The hostel is pretty full up, so there’s not much chance to change rooms, but if it’s still bad tonight, I’ll see what I can do in the morning.

Another thing I don’t care for is that they’ve significantly downgraded the breakfast.  In the past, everyone had the breakfast.  It was ok, but it had bread, rolls, toast, cereal, cheese and meat, oatmeal, fruit, various forms of cappuccino, hot tea, coffee, eggs, etc.  Now, only groups get breakfast, everyone else pays for a breakfast in the café, which is a lot nicer.  The group breakfast is little more than a continental breakfast with tang and cereal.  I’m not sure I want to stay here again in two years (assuming I’m not so frustrated by accounts payable that I give up ever doing a trip again).

The weather did not cooperate today.  I delayed the start by 15 minutes until the worst of the storm had passed.  That way, we only had to walk for two hours in light rain.  I’ve designed this trip so that during our time in Berlin, we travel in a spiral outwards from our location.  Yesterday, we walked down to Museum Insel and the Gendarmarkt.  This morning we headed east through the Scheunenviertel (the former immigrant Jewish neighborhood in the center of Berlin).  In 1991, the artist Shimon Attie came to Berlin and staged an amazing art project.  He found old photos from the 1920s and then tried to locate where the photo had been taken.  If the building was still standing, he projected the original image to scale on the site.  (You can see the effect at his website:  http://shimonattie.net/portfolio/the-writing-on-the-wall/ )

Walking the streets with laminated printouts of this photos and looking at the contemporary building created a kind of palimpsest.  Each space exists simultaneously in three time zones.  The contemporary building from 2017; the run-down post-cold war buildings of 1991 when Attie staged this project; and the ghostly images from the 1920s being projected.  In this way, Attie found a way of making the memories in his head visible to those who forgot or ignored them.

I met Attie in London in 1993, back when he was an unknown artist carrying around a large portfolio of his work.  I was at a conference having lunch and he sat down at my table.  When he showed me these photos, I was completely blown away.  Now, he’s world famous.

Along the way, I pointed out the Stolpersteine project, the stumbling stones created by local people working with a non-governmental organization to commemorate the Jews who used to live in these buildings and who were deported, or fled, or were murdered.  Last time, I literally stumbled across Manfred Lewin’s plaque; this time I was prepared and had printed out two pages from Gad Beck’s autobiography where he described trying to sneak him out of a Nazi deportation center.  If you want, you can see Gad Beck describe it in German, with subtitles, here:  https://sfi.usc.edu/video/gad-beck-rescuing-his-lover-manfred-lewin
It was nearly 12:30 by the time we reached Alexanderplatz, where we had lunch. 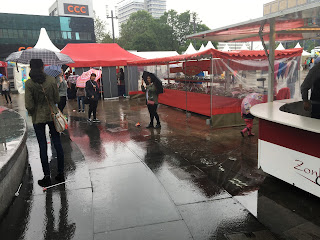 Then it was back to the hostel for a short break before our afternoon walk.  This was devoted to Berlin during the Cold War, and it involved learning about and seeing the Berlin Wall.  We started at Nordbahnhof, which was a “ghost station” during the time of the Wall (S-Bahn trains passed through, but never stopped here).  From there, we walked along the former route of the wall and saw the preserved section of it.

Across the street at the memorial information center, that had a lot of background for the students on the wall, and the DDR.  They had a new video on the five months leading up to the fall of the Wall, beginning with Hungary’s decision to open its border.  I found myself tearing up at the protest scenes (which I usually do when I watch a similar video in Prague. 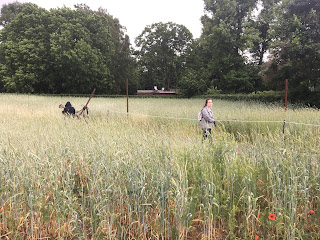 A memorial formed from a field of rye at the site of the former Church of Reconciliation, blown up by the East German government in 1986


By 4 pm, the rains had long stopped and the sun was beginning to peak out.  I decided to join the students for dinner at a place just two doors down from the hostel. 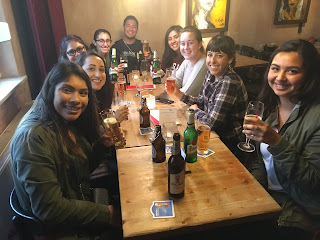 I ordered the Rostbratwurst, which was very good, but the roasted potatoes were far too much like home fries for my taste. 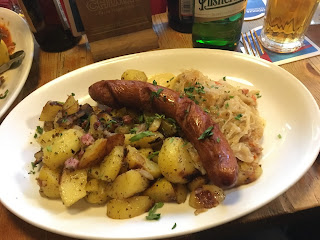 Afterwards, I went for a walk (though we had already walked over 6 miles today, according to one student’s tracker).  Nice views of the New Synagogue, 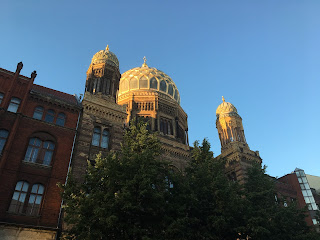 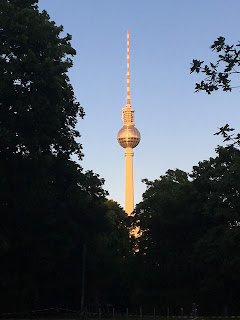 and the Berliner Dom (cathedral) at sunset. 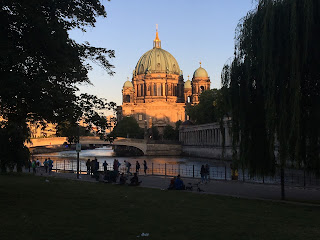 Over along the Spree, they had were tango dancing. Elsewhere, bars set up beach-style chairs for people to enjoy the better weather. 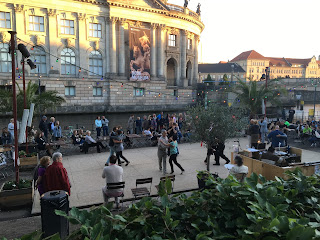 The forecast tomorrow is for no rain, which is great since we’re going to be indoors. We widen the spiral to the former Gestapo headquarters not too far from Potsdamer Platz, and then we head over to the Jewish Museum in Kreuzberg.  Rain returns on Tuesday when we will be walking outdoors through Sachsenhausen.  The weather does not appear to want to cooperate this trip.
Posted by J.B. at 2:13 PM