Of all the places we visit in this course, the one that all the students have heard of in advance is Auschwitz.  It sort of exists as an amorphous concept in their imagination.  In literary theory, we would talk about their “horizon of expectations.”  That is, what images do they have of the place before they actually read about it or visit it?

For many of the students, there’s a profound disconnect between their expectations of a place and its reality.  Auschwitz I (aka the Stammlager or base camp) was created out of a Polish military base.  The barracks are two stories, made of brick, have normal windows, floors, and stairs.  As we walk the halls, we don’t feel the ever-present fear, smell the stench of excrement, hear the beatings and prisoners dying, see the emaciated prisoners, or taste their hunger.  The rooms are clean, sterile, and out of the elements.  We come expecting hell, but other than the double rows of electrified barbed wire, we see very little of it.

Some of it can come from the historical displays in the various barracks; the mug shot photos of prisoners, the two tons of women’s hair on display (out of seven tons recovered at liberation), the collection of shoes, the models of the gas chambers and crematoria.  Yet, the sterile surroundings war with our expectations.

For that, we will need to go to Birkenau tomorrow morning.  Today, however, we stayed only in Auschwitz.

I had timed tour tickets for 1:30 pm, but I wanted to visit two “pavilions” not on the main tour:  the Jewish and Roma Exhibits.  We got there around 10 am and I negotiated with the guard to let us in.  The entry procedure has changed somewhat from last time.  Now, you must go through metal detectors and only through a single turnstile.  The guard wasn’t going to let us in, but the staff prevailed upon her.

When the Polish communist government prepared the camp museum, the various special exhibits were all based on nationality.  Since Jews were not a nation (the government was strongly anti-Zionist and anti-Israel), a special pavilion for Jews only opened in 1967.  Shortly after the Six Day War, the government closed it and it remained closed for over a decade.  I saw it when I came here in 2006 and it was truly awful.

Since then it’s been revised and is very good.  It’s goal is not to provide a detailed history of the entire holocaust, but rather hit certain major themes. The first room, really a corridor, is faith.  They simply have the song, Ani Ma’amim (I believe) playing on a loop.  That enters on to a large room dedicated to showing Jewish life in Europe in all its diversity before the war, with a montage of film clips and photos from Jewish communities across the length and breadth of Europe.

From there we are introduced to Nazi ideology, with a series of powerful and devastating quotes from Nazi leaders laying out their anti-Semitism and its critical role in Nazi ideology.  That naturally transitions into a summary of the various ways the Nazis killed the Jews of Europe:  ghettoization, death camps, concentration and labor camps, mass shootings, and death marches.  The next room focuses on the Jewish responses to the Holocaust, mixing writings from the boys of the Theresienstadt Group Home #1, with interviews with various survivors, and letters of those who were murdered.

There is a very powerful room focusing on children, which consists only of reproductions of children’s drawings on the walls around the room. 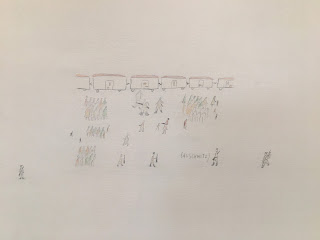 Finally, we come to a room with a giant book of the four million known names of Jewish holocaust victims.  As I did last time, I found my great grandmother’s name (though she is listed as “Gusta Steinlauf” rather than “Gussie” or “Gittlel,” which is how I’ve heard her named).

The next pavilion we went to is the Roma exhibition.  This needs to do a lot of “memory work.”  Very few people know anything about the Porrajmos (literally, “the devouring”), and few nations in Europe commemorate the persecution of the Roma.  This exhibit is a careful, chronological overview of the persecution and murder of the Roma and Sinti of Europe, very different in approach from the Jewish pavilion. 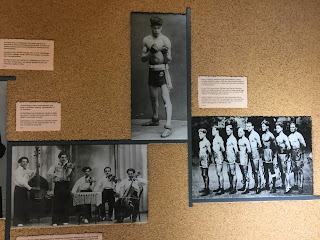 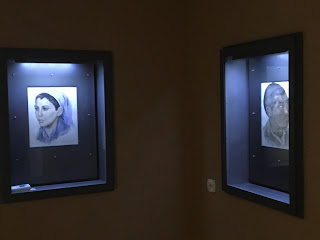 It was almost 12:00 when we finished, so we headed to the cafeteria to eat a small lunch before our main tour.  This is also somewhat shorter than the tour we did in the past, as it skipped the barracks showing the everyday life of prisoners in the camp. 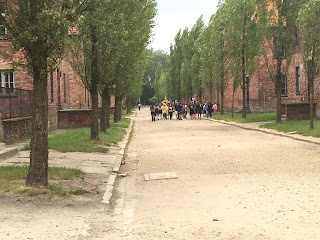 We finished our tour of Auschwitz I in just under one and a half hours.  After a short break, they went on to Birkenau, but we will go there tomorrow.

Back in town, I got the very good news that the hotel is refunding the very large amount the university had overpaid, and better yet, the returned it to me in cash.  That meant I could buy the students dinner (and lunch tomorrow and dinner tomorrow night).  I had already scoped out where the food trucks were, but the students decided they prefer a sit-down place, so we went to Mama off Plac Nowy.  I had the red dumplings, filled with duck and red currants. 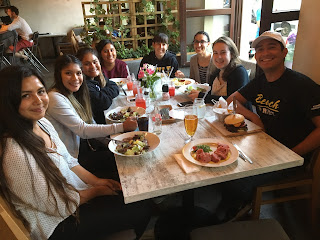 Afterwards, I promised the students ice cream and they wanted to try what they called “roll up ice cream” but the Poles call “Thai ice cream.”  The liquid to be frozen along with any mix ins is poured on an anti-griddle and flash frozen.  The mix ins are chopped in and they the whole thing is scraped into a dish. I got peach and I didn’t care for it.  The only flavor in it came from the peach and it didn’t have the mouthfeel of ice cream.  Rather it tasted like unsweetened low fat ice milk.  I’m not sorry I tried it but I won’t have it again. 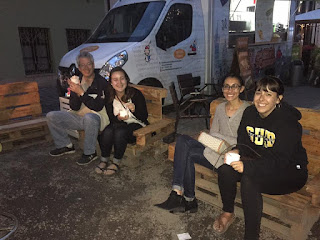 I left off two adventures before dinner.  The first was when I tripped and fell on the sidewalk.  My glasses went flying and my jeans were slightly ripped, but the good news is that my knee came through fine.  No blood.  I was a little shaken, so I went across the street and sat in a café and drank a cappuccino to steady myself. 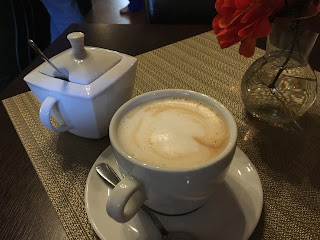 The other adventure was far more pleasant.  On our way, we walked by the Krakow JCC, which was having a party. 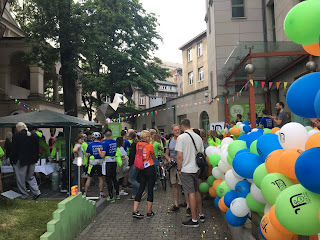 This was the culmination of the 2017 Ride for the Living.  At 8 am, the cyclists left Auschwitz and biked the 55 miles back to Krakow.  We happened to walk up just as they arrived.  I ran into Yakub, who filled me in on the story.   We chatted with a few of the riders, and the students got some beer with the JCC event logo on it, and we headed off for dinner. 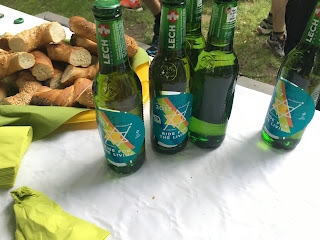 I asked how they were going to chill it, but they said that they would drink it warm later.
Posted by J.B. at 2:03 PM