The Damnation of Faust

I’ve just had one of the strangest nights at the opera in my life.

When I bought a ticket to Berlioz’s The Damnation of Faust, all I knew about it was that 1) it’s based on Goethe’s Faust and 2) I’ve heard the instrumental section known as “the Hungarian March.”  That was it.  I read a synopsis of the plot online, so I figured I was prepared for the performance. 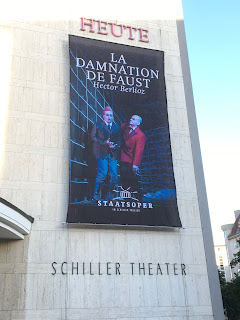 When I got the program, I discovered that this staging was designed by Terry Gilliam of Monty Python fame, who also directed such movies as Time Bandits, Brazil, The Fisher King, and 12 Monkeys.  He has a rather rich and idiosyncratic visual style.  This boded well.  The orchestra was directed by Sir Simon Rattle, which also boded well. 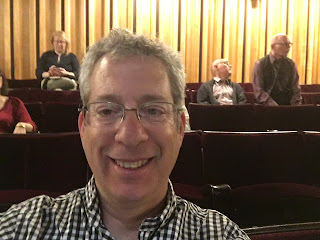 Act I opens with Faust studying nature in a tableau that could have been a Caspar David Friedrich painting brought to life.  Mephistopheles was appropriately demonic and the staging of the Hungarian March became World War I, with scenes inspired by Otto Dix.  Soon, we are in Weimar Germany, as the Marxists and Nazis engage in street battles that looked like they were staged by Georg Grosz.  And oh, look, we now have Hitler on stage, as Mephistopheles arranges for the Nazis to win power and Faust dons a brown shirt.  The song of the flea reveals the flea to be a tiny insectoid Jew, and Act I ends with the Nazis shooting all the communists, and Hitler unveiling the poster for Der Ewige Jude.  That’s when we had the intermission.

Act II opens with Kristallnacht.  Marguerite is revealed to be a secret Jew as she lights the menorah (though with seven candles, not eight) and her apartment is marked with a Jewish star.  Meanwhile, Mephistopheles is now dressed like an SS officer, while his demons slap Jewish stars on various passersby.  Faust comes to her and they sing their duet, but then Mephistopheles leads the Gestapo to the lovers’ apartment, where Marguerite is unmasked as a Jew and joins the columns of those being deported to the east.

Act III opens in what I first thought was supposed to be a kind of stylized boxcar, but is rather the waiting area in a death camp.  As Marguerite sings her aria, the SS come in and separate the men from the women, pushing the men though a gate.  A little while later, all the women, children, and finally Marguerite are pushed through (here, as in reality, the Nazis gassed the men before the women and children, as the men were more likely to resist).

Flickering flames are visible through the barrier, which then rises to reveal the original forest scene, only with Faust now burning his books while Mephistopheles watches.  Mephistopheles offers to take Faust to Marguerite if he signs away his soul, which he does.  They race off in a motorbike, while Allied bombers strafe the countryside.  As Faust reaches the gates of Hell, they are marked “Arbeit Macht Frei.”  In Hell, he is crucified upside down to a swastika.

The epilogue reveals Marguerite dead in a gas chamber atop a pile of corpses, and the choir sings her soul to heaven.

I have to say that I didn’t care for this staging at all.  Mephistopheles as a Nazi has been done many times before and better.  I didn’t think this approach offered any new insights into 1) Germany, 2) the Nazis, or 3) the story of Faust.  Instead it obscured understanding by mystifying all of the above.  The apotheosis of Marguerite is really a Christian story, and it just doesn’t work to make her a Jewish victim of the Nazis.  It transforms the Holocaust into a story of crucifixion, which, last I checked, wasn’t a Jewish metaphor.  The Jewish story becomes an object to illuminate the travails of the German subject.  Let Gilliam tell his own story rather than borrow mine.
Posted by J.B. at 2:08 PM