Last time I took students to Vienna, several of the students became convinced the hotel was haunted.  I chalked that up to one student who believed any building older than 50 years was haunted, and a sociology student who decided to stoke their fears by telling them he was hearing moans and other noises.  This year, however, several other students told me they thought the hotel was haunted (without knowing anything about the prior class).  One told me she had heard a child running in the hall at 3 and 4 am, but never heard a door open. The other told me that someone or something had suddenly knocked the fan over.  Haunted or not, I like this hotel, its buffet, and its location, so we’re coming back in two years, ghost or no ghost. 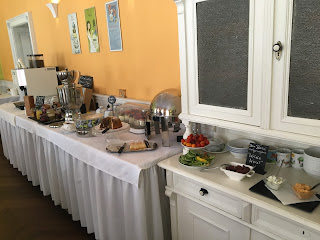 Normally, when we finish in Vienna we head on to Budapest, but I’ve had so many logistical problems in Budapest the last two times, I decided to go right to Warsaw.  The problem is that the overnight train to Warsaw doesn’t leave until 10:50 pm, but we check out of the hotel in the morning.  How should we spend the rest of the day?

I put together a plan:  tour the Jewish Museum in Vienna and the Stadttempel, have lunch in the Naschmarkt, tour Schloß Schönbrunn, dinner in the Altstadt (perhaps at Trześniewskis), and then dessert and drinks at Café Landtmann before picking up our luggage in storage from the hotel and heading off to Wien Hauptbahnhof.  It would have all worked like a charm except for one thing:  Thursday was the Catholic feast of Corpus Christi.

My first clue should have been when the Jewish Museum told me that the synagogue would be closed for a holiday.  Holiday?  I thought.  What holiday?  I checked the Jewish calendar to see if I overlooked something, but nothing was there.  Maybe it’s something local.

I only found out Thursday morning when I discovered all the shops were closed, including the tobacconist, where I had intended to buy our metro day passes.  As I walked to the nearest station for a machine, I could see all stores were closed.  I had already confirmed the museum was open, so we went and toured what for me was a new presentation.  Gone were the cheesy holograms on the 3rd floor, replaced by a good chronological history. 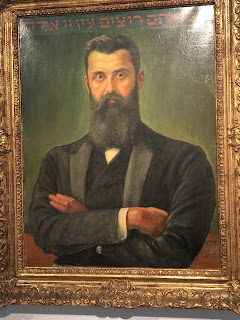 Eichmann’s office’s chart on their success in expropriating and expelling Austrian Jews was chilling. 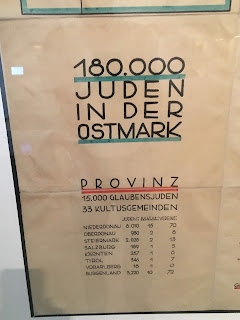 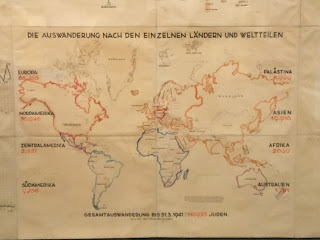 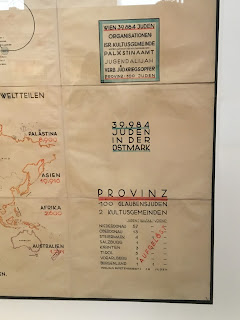 Their temporary exhibition was on merchant culture in Austria and I met two cousins, one from Australia, the other from the U.S.  The woman from New York turned out to be a 94-year old survivor.  As a Mischling (only a mother was Jewish), she was spared from wearing the Jewish star, and could go out to buy food, but she couldn’t marry, or go to university.  All she would tell me of her experiences during the war is that the Austrians were worse than the Germans.  I asked her if she would be willing to talk to my students, but she declined, saying that she gets very emotional when she goes over this.

I met my students and we headed over to the Naschmarkt.  The day was getting hot and I figured I’d find a nice shady and cool place to eat in the market, but no, the entire market was closed for the holiday.  We ended up going to Hauptbahnhof just to find something decent to eat.  In the meantime, I bought Mozart Kugeln to surprise the students with later.

From there we headed out to Schloß Schönbrunn, Empress Maria Theresa’s out of town, but now in town palace.  I bought timed tickets, but we couldn’t enter until 4:28 and it was only 3:10.  I figured we would stroll through the gardens, which were lovely, but it was so, so hot.  Every time we passed a water fountain, I urged the students to drink and then top off their bottles. 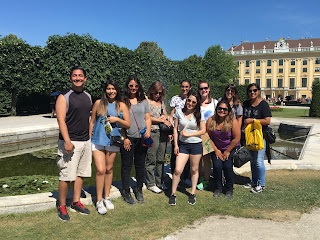 The fountains and gardens really were lovely, and were even enjoyable in the shade. 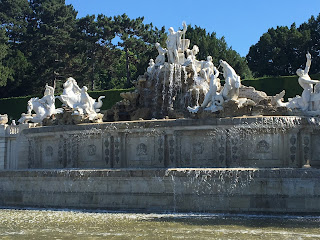 Finally, our turn came to tour the house and we got our audio guides and made our way through the crowds.  Signs insisted that all photos, even with flash, were prohibited, but I did manage to sneak one shot of the small ballroom, and helped another student get a shot of the main ballroom. 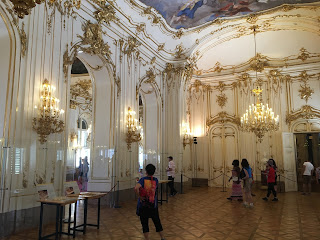 By the time we finished it was after 5:30, so we made our way back to Stephensplatz for dinner.  I hoped to go to Trześniewskis, which I knew was open until 7:30 pm, except on holidays, it turns out, when they close at 5 pm.  Nothing was going my way, it seemed.  After 20 minutes of walking, I finally founded a bakery where I could get a sandwich.  Afterwards, I headed over to Aida for a coffee and to read the paper. 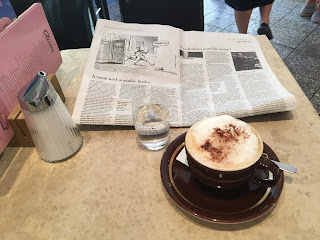 At 7:30 we met to go to Café Landtmann.  It took faster than I thought, and I didn’t want to show up really early for my 8 pm reservation, so I tried to stroll leisurely to the Ring.  As it happens, Vienna Pride opened their fair and booths virtually opposite the café, so we took a quick walk over. 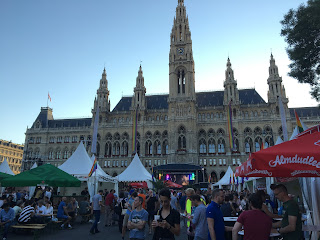 When we got to the café, our table was waiting in the climate controlled outdoor area.  I bought the students one dessert and one non-alcoholic drink.  Unfortunately, on such a hot day, the café had sold out of strawberry ice cream.  In the end, though, everyone was very happy with what they ordered. 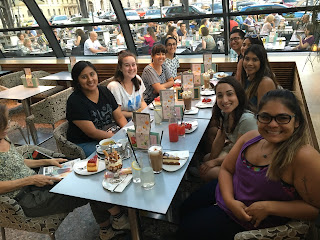 I ended up with the nuß krokant becher, somewhat similar to what I got on the boat in Dresden.  It had vanilla and walnut ice cream, along with chocolate sauce, nuts, crocant (a kind of nut brittle), whipped cream, and waffle tubes.  It was very good. 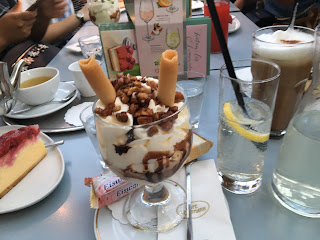 Everything went well with picking up our luggage and getting to the train.  With only one other male passenger in the group, I had no choice but to share a sleeping compartment with a student; the only time I ever do.  The nine female students were split between three compartments. 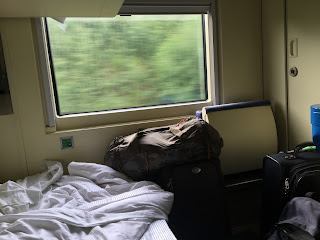 Several of the students are suffering from bad colds and congestion, and as the train began to move, a few of them started to develop motion sickness.  I went from cabin to cabin urging any who felt sick to lie flat on their backs and close their eyes.  That seems to have worked.  Only about a third of the students (plus me) slept well on the train.  The others had difficulty getting used to the train’s movements.

I wasn’t able to get our usual hotel in Warsaw, but I booked one in the same building.  I was kind of wondering how that would work, but it turns out that this building is shared by three hotels, each with their own staff, accommodations, and breakfast.  The one we’re in seems definitely down market from the other. That explains why it was so cheap. 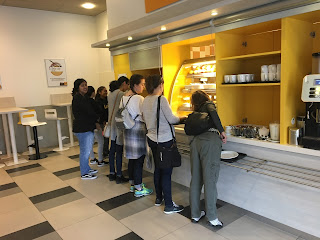 After a so-so breakfast, we headed out to tour the fragments of the ghetto.  After some difficulty we found the last remaining pieces of the ghetto wall, and I talked about the effort to save them from the Polish communist government.  I also brought photos of the wall’s construction. 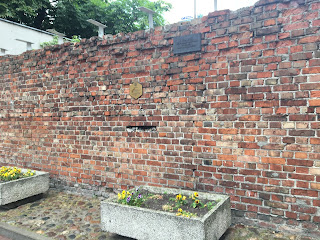 From there we toured the Nozyk Synagogue, which provided an opportunity to explain aspects of Jewish religious culture. 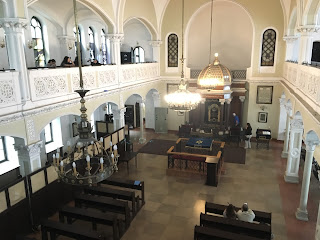 I treated the students to lunch at Zapiecek, a chain restaurant specializing in pierogis.  In the past, pierogis quickly become the students’ favorite food in Poland. 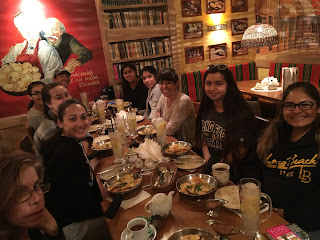 Last time, we toured the Polin Museum as individuals, but the museum is simply to jam packed to see that way, particularly for students with no background in Jewish history or culture, so this year I hired a guide.  This was the right decision; she really helped by highlighting the most important aspects of the museum’s collection. 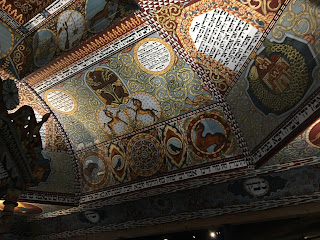 The museum is really well designed and covers a rich and complex topic very well.  The guide spent a fair amount of time on the Holocaust section, but that worked well with the topic of our class.  I was really surprised how much she managed to cover in just two hours.

Before we left the area, I showed them the two monuments to the ghetto uprising (the first, from 1946, and the more famous, from 1948).  I also talked about Jan Karski and recounted, while fighting back tears, what he witnessed in the ghetto and his efforts to get the western powers to intervene on behalf of Polish Jewry.

We barely made it back to the hotel before pouring rain hit.  Luckily, it lifted before we left for Ec Chaim (in English spelling Etz Chaim), a reform synagogue in Warsaw, very close to our hotel. The students (only one of whom is Jewish) weren’t sure what to expect and since I had never been there, I didn’t know what to expect either.  As it happens, there was another smaller group of English speakers there, so the rabbi did his sermon in English.

I was surprised by how Orthodox the prayerbook (in Hebrew and Polish) was; it was not even conservative, let alone reform.  The melodies, on the other hand, were exactly the melodies they sing at American Jewish summer camps.  A rather strange mixture.

I forced the students to sit and talk with the Poles over dinner, but it was rather hard; in part, a few of the Poles told me, because they too were nervous about talking to the Americans (not sure why).  I had a long chat with the rabbi, who is from Tashkent (though of Polish heritage).  His family moved to Central Asia to escape the Nazis.