Our last full day in Poland is always a light one.  I let the students sleep in, so our departure this morning wasn’t until 10 am.  We walked over to Kazimierz and explored some of the efforts to create a post-war, post-communist Jewish identity for this district.  We checked out the famous courtyard used by Spielberg and so many other filmmakers to evoke a “Jewish feel” for the neighborhood.  We also stopped by the Kupa Synagogue, which has a restored roof and some wall art.

After that we headed over to the Galicia Jewish Museum.  Lila, who we met at the JCC, was behind the counter and she let us in for free as most of the museum was closing in 10 minutes to prepare it for an event this afternoon.  Actually, we had close to 20 minutes to look over their core exhibition of photographs Traces of Memory, looking at the history of Jewish Galicia.  Our final stop in Kazimierz was the High Synagogue, where we looked at a short exhibition of photographs from Krakow Jewish families.  I would have also liked to visit the Remuh and Isaac Synagogues, but we had to be at Wawel Castle by no later than 12:20, which didn’t give us a lot of time. 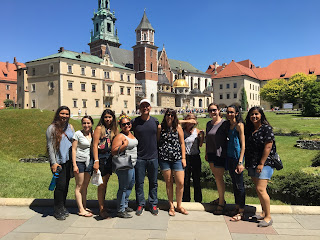 The castle has stunning views of the river and even a legend of a dragon (Smok).  In 1972, they built a statue of one at the base of the castle, and every few minutes it breathes fire out its mouth. 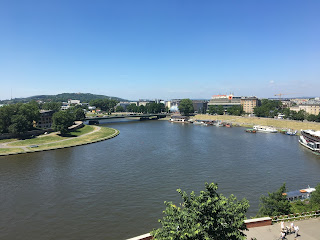 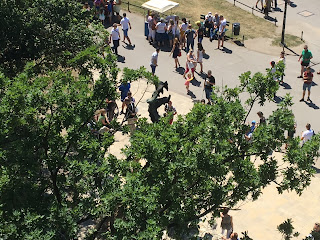 The tour of the State Apartments was nice; I miss seeing Lady with an Ermine, but the Da Vinci painting was moved last month to the National Gallery a bit aways.  Afterwards, we sat in the café on the castle grounds and had a late lunch.

After that the students were free until our farewell dinner.  I went off to the Stare Miasto to do some last souvenir shopping, then off to the train station to buy a newspaper.  They were out of The International New York Times so I got the weekly Guardian instead.  After that, I stopped at a café for one last kremowka and cappuccino. 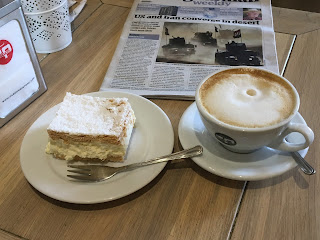 It’s been a warm day (84 earlier, 73 now) and a little humid.  It’s been threatening rain all evening and we now have a 50% chance in the next hour.  I showered and changed and met the students for one last time here in Poland.

We walked the 15 minutes to Kogel Mogel.  They had a table for us indoors as they thought it might rain.  I have to say that I like this place better than Szara Kazimierz, which is where we’ve eaten the last few times.  I think they had a wider selection of entrees and first courses. 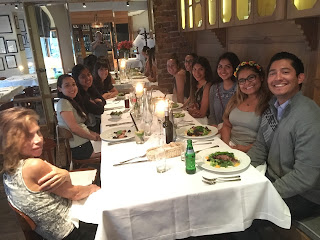 I started off with the goose liver pate with roasted cherries and pumpernickel sand.  It was excellent; some of the best pate I’ve ever had and on a par with the duck liver pate crème brulee I had in Berlin. 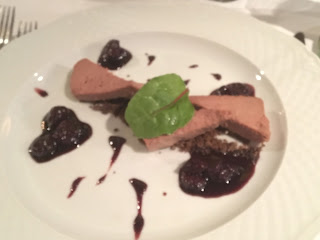 For my main course, I went with the goose leg.  Kogel Mogel won an award for best goose in 2012, which is a good sign they know how to cook it well.  The skin was crispy but the meat wasn’t overcooked and dry, the way it can be.  It was covered in a roasted plum sauce. 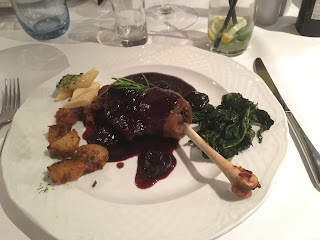 About half the students ordered the dry-aged beef tenderloin, mostly cooked medium to medium well.  Many of them were only cooked medium rare (which would have been perfect for me) 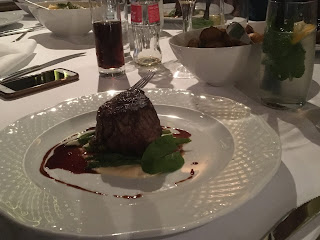 I thought about getting the profiteroles for dessert, but they weren’t filled with ice cream, but egg nog (advocat).  I knew the szarlotka would be too heavy, so I ordered the home made vanilla and cherry ice cream on hazelnut sand (the really like “sand” in this restaurant.  It was just what I needed. 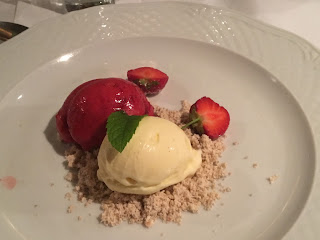 This was the Szarlotka: 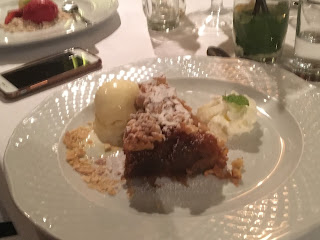 I suggested that after such a heavy meal we walk back.  The temperature had cooled off and I thought it would be nice to visit the rynek square one last time.  There was a busker singing a popular Polish song, with all these Poles arm and arm singing along at full volume.  All the buildings were lit up and the restaurants and cafés full of people, with the horse carts for tourists clopping by every few minutes. 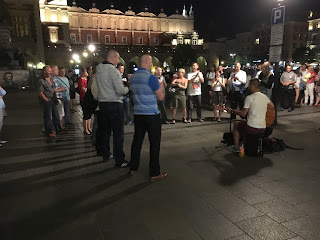 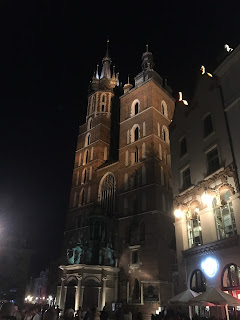 Back at the hotel I said my goodbyes to about half the students who are either staying in Europe or on other flights.  Now I’m about 50% packed and need to finish up.
Posted by J.B. at 2:23 PM