Another long day with (partially) uncooperative weather, but in the end, a good day.

This morning we headed back to the Brandenburg Gate 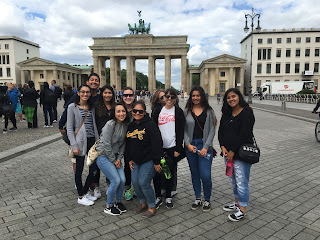 where who should we run into but the actors Terry Bradshaw, William Shatner, Henry Winkler, and George Foreman, all filming an episode of their tv show, Better Late Than Never.  Winkler did a selfie with one of the students, but Shatner was just “get out of my way.” 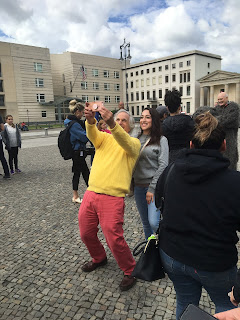 From there we headed to the Information Center for the Memorial for the Murdered Jews of Europe.  I always find this memorial deeply moving, with its emphasis on the individual stories of those who were persecuted.  It’s always easier to tell the story of those who were the perpetrators than the stories of the victims.  The perpetrators have a single narrative, while each victim had his or her own unique story. 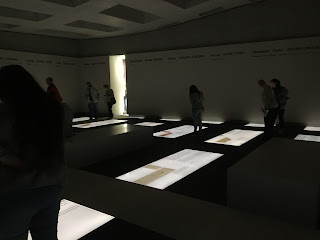 As we were leaving it started to hail.  Only half the students had umbrellas, but the storm was short.  We walked to the Roma Memorial that had been closed off yesterday and then back to Unter den Linden.  Lots of fast moving clouds, some with rain, but we arrived safe and sound.

We went back to the hostel so those who needed jackets and umbrellas could pick them up. I went off to a vegan restaurant nearby for some vegetables.  I ended up getting the roasted cauliflower with tahini. 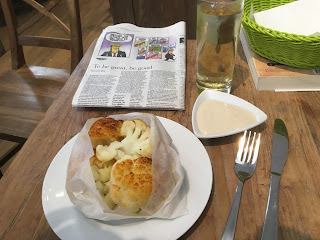 Then we went to the Pergamon Museum, where I had arranged for the students to have free admittance.  Because of the extensive renovations to the building, less than a third is still open (the Pergamon Altar won’t reopen until some time in 2019), but what’s on display is still spectacular. 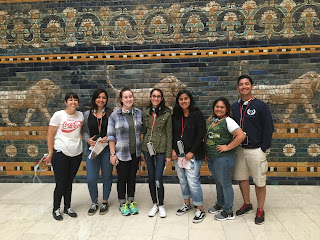 Not all students went to the Pergamon, and some left early, but I arranged to meet them all at 3:40 in front of the Berliner Dom.  By 3:35, 8 of the 10 were there.  At 3:40 we went to the bus stop and then the last two students came running up (they got lost).  Luckily, they had time before our bus came and we all met our guide just before 4 pm.

I had contacted Refugee Voices Tours and we took the “Walk Around Berlin With Syrian Eyes.”  The idea was to visit important sites in Berlin history and contrast them with recent events in Syrian history.  Our tour began at the Finance Ministry (site of the 1953 protest), continued to the Topography of Terror, Checkpoint Charlie, and the Gendarmarkt.  Along the way we learned about the massacre of Hama in 1982, the rise of the Arab Spring and the uprising in Syria leading to the Syrian Civil War.  We then heard about the Syrian refugee crisis and how our guide and family made his way from Syria to Egypt to Libya to Italy to Germany.

Afterwards, we went to a Syrian-run restaurant for a very good buffet dinner.  Some of the students said it was the best meal we had had in Berlin. 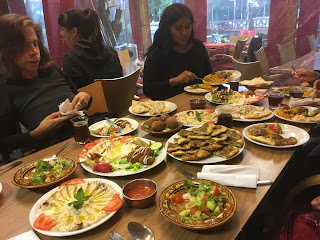 Some of the items on the table:  Mutabel (what I would call baba ghanoush), tomato and cucumber salad, falafel and hummus, muhammara (one with cheese, one with za'atar), lamb mandi, and kibbeh (my favorite).

Tomorrow we leave for Dresden.  As of my last email from the university, they intend to pay my hotel in Prague in less than an hour (at 2 pm, California time).
Posted by J.B. at 1:23 PM