Dad decided to stay on board, so only I went on this excursion. I really enjoyed it.

It was partly cloudy and windy when we left the ship (that's Isabela Island in the background): 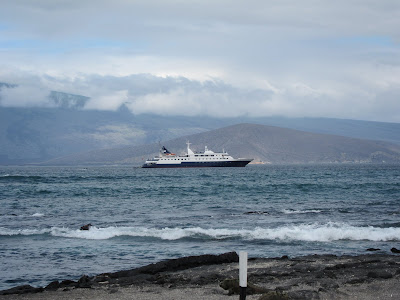 We landed in a mangrove swamp 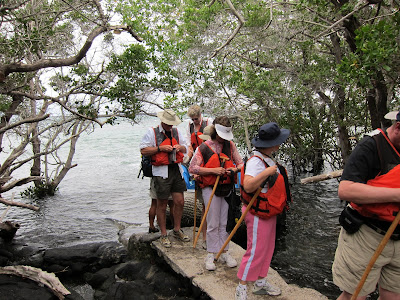 (the woman in the visor and pink shirt is Sandy, the former treasurer for LA County, and a delight to speak with)

where we were greeted by a few animals, like a marine iguana 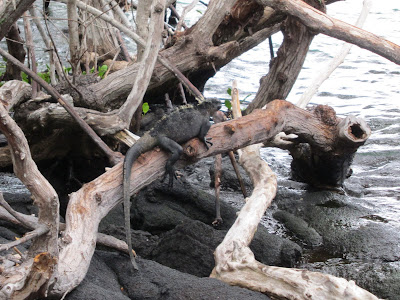 and a sea lion 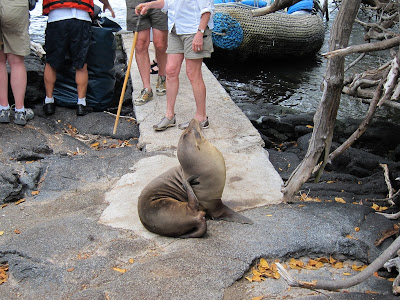 As we moved away from the grove, we came to lava deposits and beaches covered in marine iguanas. 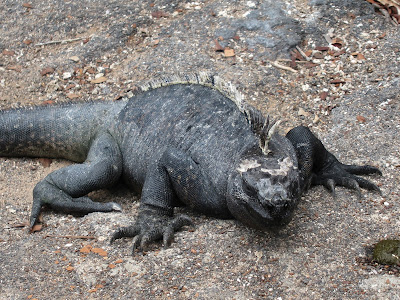 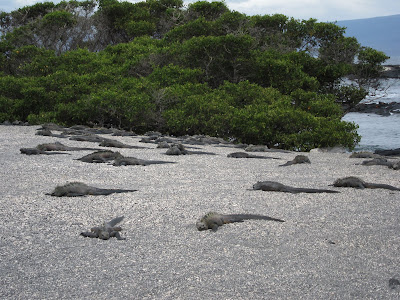 Fernandina is the youngest of all the Galapagos Islands, and is still growing. The volanic peak rises in the distance, but the area around us was mostly fresh pahoehoe lava. 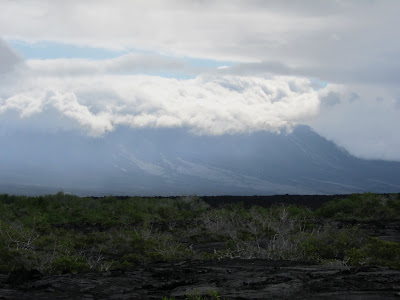 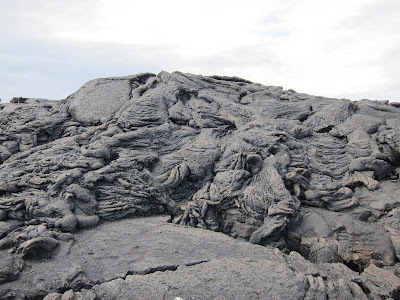 Our naturalist dropped his lens cap into a crevasse and had to retrieve it (with difficulty): 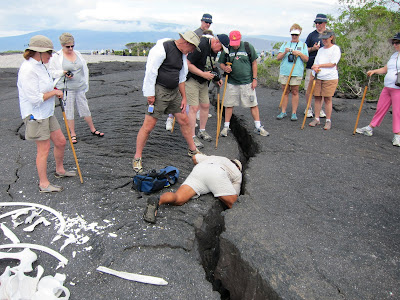 (In this photo, Ed -- wearing a green shirt and pink hat stands astride the crevasse, while his wife Nancy -- wearing brown shorts, white t-shirt, and visor stands a little to the right. We spent our extra day in Quito traveling with them. They're from Rhode Island, and Ed recently retired).

Here the naturalist is showing us how the cactus breaks slowly breaks apart the lava, converting it into soil, while also providing food for the marine iguanas. 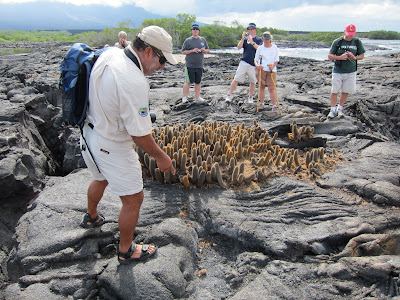 (behind him, from left to right are visible Simon, Dwight, Nancy, and Ed).

On the lava rocks near the surf we saw scores of marine iguanas, including this big one who had just evicted some small, younger iguanas, and was doing the head bob to demonstrate his aggressiveness: 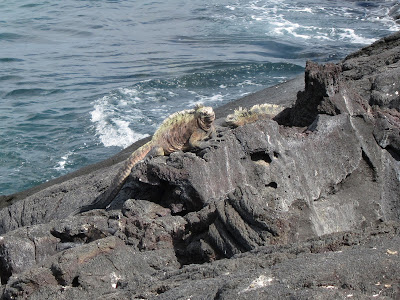 It was very easy to get up close with the iguanas. Too easy, in fact, as I nearly stepped on one: 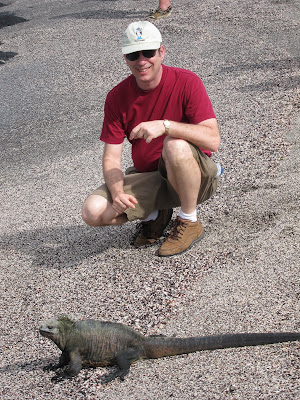 Here Simon and Dwight pose on the beach: 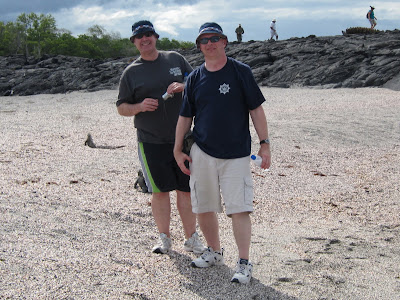 There were iguanas everywhere, including swimming and climbing out of the water: 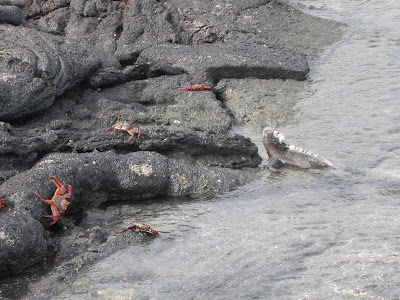 We saw one really cool looking one perched in a dead tree. The naturalist explained that this was not drift wood, but a mangrove tree that had died because a volcanic uplift had moved it too far from the sea water. 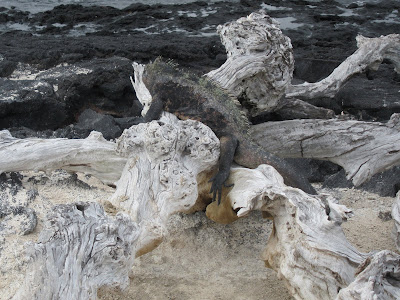 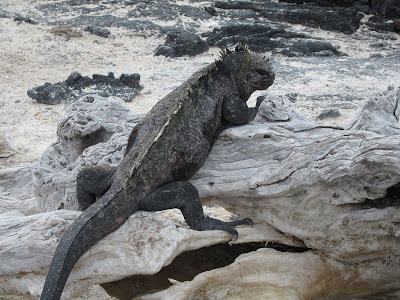 There were, of course, many sea lions on the beach, including a mother nursing her pup (who looked rather thin -- only about 25% of pups survive to adulthood). 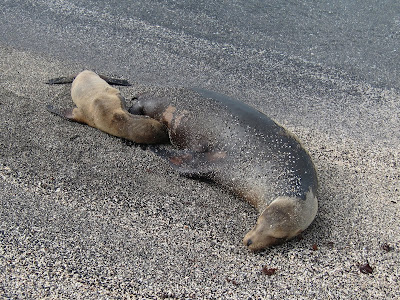 and this "beach master" male, who got a little upset when some people got too close to his domain: 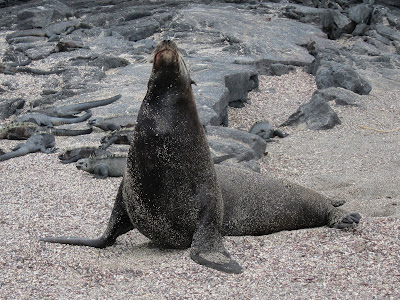 The naturalist got excited when he noticed this creature in the surf: 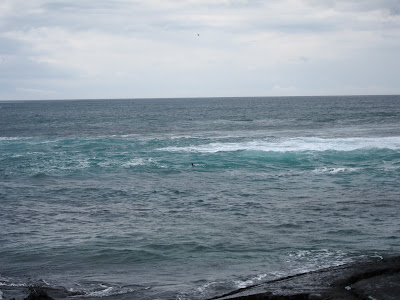 Can't see it? Let me enlarge the area: 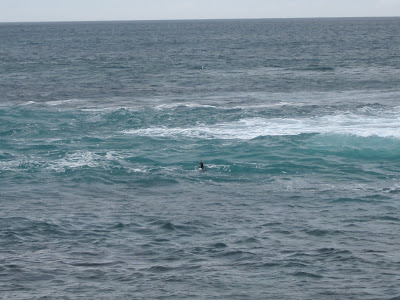 Still can't make it out, well, let me really blow it up: 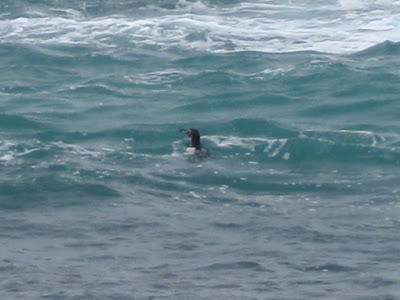 It's a Galapagos penguin swimming in the water.

As we made our way back to the mangrove landing site, we passed some interesting birds, including flightless cormorants: 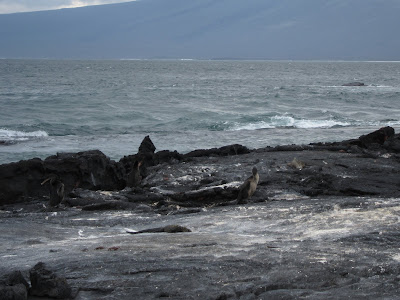 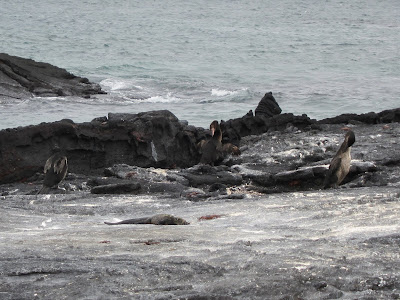 (note the stubby, useless wings on the bird in the middle) 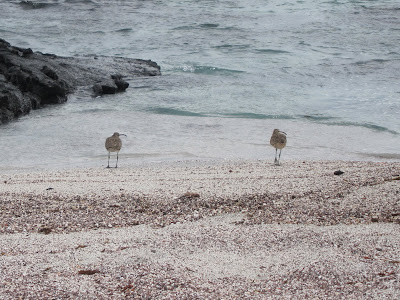 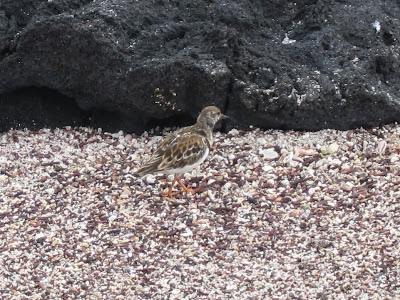 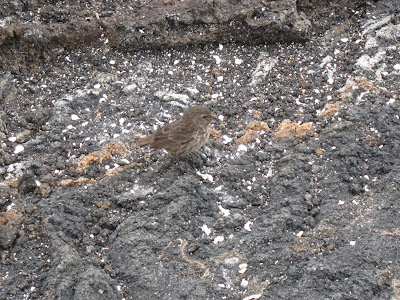