Yesterday’s trip to Berlin has me thinking about why I like the city so much.  I was hoping that Matt and Shayna would experience the same Berlin I love, but that didn’t happen.  It wasn’t just the problems with the trains home; I think it was built into the structure of our visit.

As we were waiting on one of the many platforms yesterday, I was speaking with a woman who lives in the Moabit neighborhood of Berlin.  When Shayna asked her why she liked Berlin, the woman explained that on the one hand, she gets all the benefits of living in a small town. She shops in her local neighborhood, knows the people in the stores where she shops, who live in her building, who she sees on the street.  At the same time, she gets to go to all the museums, concerts of the big city.  She combines small town community with big city society.

What she said really resonated with me.  Usually, I stay in Prenz’l Berg, and I know the neighborhood well.  I balance exhibitions at the Neue National Galerie with concerts at the Komische Oper.  I can work in the archives or the Humboldt University library, and then go to Café Einstein Stammhaus for some afternoon Kaffee und Kuchen.

Unfortunately, on our trip yesterday we had very little of that.  We did some of the major tourist sights:  touring the Reichstag, walking down Oranienburger Straße, and touring the Berlin Wall memorial.  We had a nice lunch in a café not that far from Alexanderplatz that I like, but that was the only kind of “regular” Berlin experience that we had. 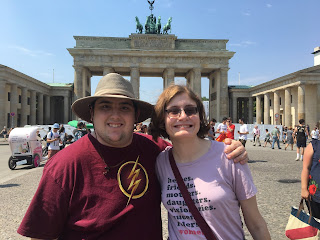 So while seeing the Memorial to the Murdered Jews of Europe and the preserved death strip of the Berlin Wall at Bernauer Straße was very moving (I always come close to tears watching the efforts by citizens of East Germany to gain their freedom in 1989), it wasn’t the kind of Berlin that I love.  It was more of an “important historical sights” trip than a “here’s where I would live three months a year if I left the U.S.” trip. 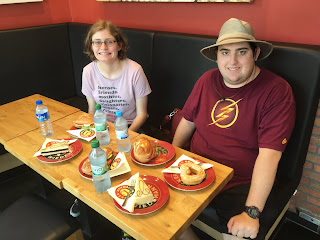 The closest I had to that was today in Kiel.  At a certain point, dad and I left Matt and Shayna to explore the Saturn store on what the British would call Kiel’s “high street.”  We let them know what café to meet us at, and dad and I sat down to enjoy the mild weather.  The people around us were almost all local Germans.  There was the young mother with her toddler have coffee with a friend; a table of six twenty-somethings, laughing and joking; a woman of a certain age with her dog; and one or two tables of tourists.  I had a Milchkaffee and dad ordered orange juice, and we just sat and chatted. 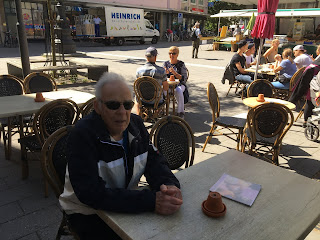 After a while, Matt and Shayna joined us and told us about the various computer games sold in German stores.  We continued to sit and chat, but as it got closer to noon, dad decided to return to the ship for lunch.  After paying the bill inside, he came out and said “go look inside!  You’re going to want to order one of those desserts.”  It was not only a café but also a “Konditorei” or a place to get cakes, tortes, and pastries. 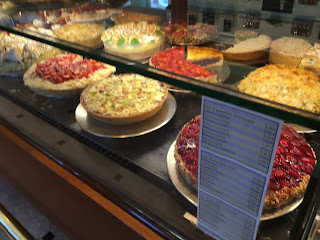 I didn’t want to go back, so I said good bye, and headed to the Kleiner Kiel, a pair of lakes just off the Altstadt.  I had nice views of the Alte Rathaus, and then made my way down to the Maritime Museum.  I had just thought it would have some models and paintings of boats, but it was much, much more.

The museum was featuring a special exhibition on the 100th anniversary of the Kiel Mutiny, but was part of the larger revolution that overthrew the Kaiser and established German democracy.  Much of the exhibit was on the early parts of the war and the role of the navy, but the heart is the Kiel Mutiny, which began on 3 November 1918, when sailors refused orders.  The mutiny spread to another port, and then to other military installations.  On 9 November, the Kaiser abdicated and left for the Netherlands, while a new democratic government was established in the city of Weimar.

The exhibit had wonderful propaganda posters, photos and documents relating to the mutiny, and a lot of great stuff on the first year of the Weimar government.  I took a ton of pictures for material to use in certain classes. 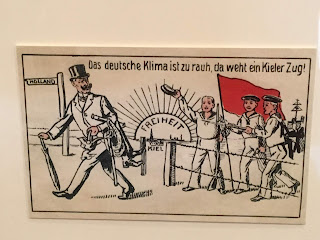 The former kaiser, post-abdication, leaving for the Netherlands, as revolutionary sailors raise the red flag in Kiel, and the sun of freedom rises. 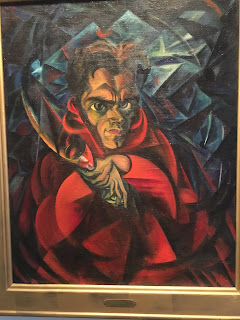 Portrait of a Kiel revolutionary (1919).

Afterwards, I headed back to the café and sat inside out of the sun.  The walls were white with pastel pink and green stripes.  I just felt very German.  I ordered the bagel with cream cheese and lox along with an apple schorle (sort of like Martinelli’s). 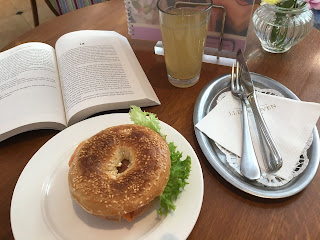 For dessert, I walked over the display counter and picked the Baumkuchen with marzipan and a chocolate glaze.  I couldn’t remember what Baumkuchen was, but she explained it was a series of thin layers, like tree rings.  I sat back down and told the waitress what I wanted, but she explained I had to order it at the counter and then get a “zettel” or note, which I would then hand to the waitress.  It worked. 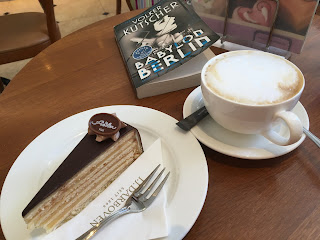 By 2:00 pm, I figured I better head back to the ship, since we had a 3:30 all aboard.  I needn’t have worried; three tour buses were late, which delayed our departure until 5:15.  In the meantime, dad and I packed up.

Matt and Shayna just found that they had been assigned a different departure time than us (they’re in the group just before us).  I advised Matt to talk to Guest Services and see if he and Shayna could stay with us until our group was called.  He succeeded in changing his departure to ours, so that problem was easily solved.

Our final dinner was pretty good for the main dining room: seafood vol au vents for a starter, and dad loved his sole meuniere, while I enjoyed by schnitzel.  For dessert, I ordered the Esterhazy Cake, which I’ve made before.  It came looking exactly right.  It tasted good, but its texture was slightly off.  I’m convince that had kept it chilled.   It didn’t taste cold, but the texture of the butter cream was too hard, the way butter gets when it’s chilled.  This cake really needs to fully come to room temperature to be just right.

Since Matt’s birthday is in little over a week, I told the waiter, and they came out and sang the Indonesian happy birthday song.  Matt seemed quite pleased, though it might have been mild embarrassment.

Afterwards, dad and I went to the final classical concert:  music from movies.  It was one of the better concerts, so it was definitely a nice way to end the cruise.  Now, I’m in 10 Forward with one last “Naut-tie” and my bag is packed and ready for the midnight pick up. With luck, all will go smoothly tomorrow.
Posted by J.B. at 1:01 PM