The Wonderful World of Communism

On Wednesday afternoon I headed off to check out two small museums close by each other: the House of the Black Madonna and the Museum of Communism.

I had tried to visit the first last year, but it was closed because of a its A/C had shut down. It's one of the first Cubist buildings in the world. 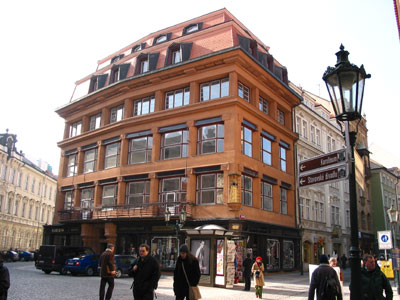 [The House of the Black Madonna]

I'm still not sure the A/C was back on, but the building is marvelous. The museum is on three small floors and has sketches, paintings, sculptures, and even furniture all influenced by Cubism. There were photos of other Cubist-inspired buildings and they had a "Cabinet of Dr. Caligari" feel to them. I picked up a book on Cubist architecture and I'm mailing it to myself tomorrow, along with the catalog of the Otto Dix exhibit in Dresden, and Paulo Coehlo's "The Alchemist," which I read on the plane (a very light read and the punch line of the story comes right out of Eastern European Jewish fiction -- really!).

Then it was on to the Museum of Communism. I visited it last year and found it engaging and at the same time moving. What it lacks in nuance it makes up for in dry humor. I didn't take my camera today (sometimes it feels like a ball and chain), but I've downloaded some photos to give you a feel for what it is like. [Recreation of the head of the Czech Secret Police's office]

There isn't a museum catalog per se (it's a private for-profit group), but they did have a cheaply printed text, which I bought to use in my research on post-communist holocaust memorials. While there's nothing about the holocaust in this museum, it fits into the larger question of dealing with the communist past.

I decided to try a vegetarian restaurant near the hotel for dinner. I had the mushroom/green bean "meat" balls in a white wine cream sauce over mashed potatoes, along with a bottle of czech beer. Not exactly low in starches. Instead of a second beer, I had a virgin mojito, which was pretty good (as was the main course, but too large a portion -- not that I had to finish it but, of course, I did).

Afterwards, I took a long walk down to the bottom of Wenceslas Square to enjoy the cool (if slightly humid) evening.
Posted by J.B. at 1:18 PM