Well, it's back to relearning the German and Austrian keyboard, with their 'y's and 'z's in the opposite position. Please be patient with any of my misspellings.

I got to Vienna with no problems. Though, I would have been happier if I didn't have to share my seat with two Americans hacking up phlegm for 4.5 hours, and a Czech man sitting opposite me who kept trying to push my feet back so he could have not only his space but half of mine too (I did not back down, and although he repeatedly tested to make sure I was still vigilant, he eventually ceded the territory to me).

Vienna is much sunnier and warmer than when I was here last year. Then it was cloudy, cool, and drizzly. I reached my hotel with no difficulty and checked into my room, which is on the first floor, overlooking a quiet side street.

I had a little time to do some museum visiting so I headed over to MuMoK (the Museum of Modern Art). I had come here last year, but much of the floors were closed while they set up a new installation. And wouldn't you know it, the same is true this year! Still, they had a few floors open, so I headed up to 8 to see excerpts from their permanent collection, covering the period between WWI and WWII. It was terrific!

They had some great pieces, including a beautiful Kupka painting called "Stärke Essay," but of course, no postcards available (I've posted a picture done by him that is vaguely similar at the top -- though the one in the museum looked more like a roiling stream of lava eruption hitting the ocean and erupting in steam). There were also some great examples of Soviet avante garde works from the 1920s, and two beautiful and moving collages by Friedl Dicker-Brandeis. Here's one of them: 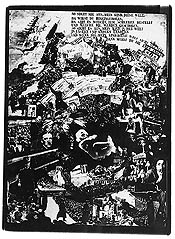 She was an important artist of the 1920s and 30s, who was imprisoned by the Nazis in the Theresienstadt Ghetto. There she taught children art as a way of helping them cope with the stresses of ghettoization. While she perished with her husband in Auschwitz, much of the work of her young students is now on display in museums in Prague and Terezin.

The post-war materials was stuff I had seen last year and really doesn't interest me that much, so I decided to try to find an ATM that would take my card and just enjoy the ambiance of Vienna. I walked down ultimately to the Stephansdom, where I found an ATM that works (I can only use ATMs attached to banks, apparently).

After that I headed for dinner at Cafe Sperl. This is one of the older cafe houses in Vienna, founded in 1880 (I sat inside on one of the original upholstered window benches, I think). The cafe was mostly empty inside, with most sitting outside on the patio, but I wanted to experience this old classic cafe.

[Cafe Sperl. I sat up towards the front and on the right]

Service was not so much slow as gentle. I ordered the schnitzel and a glass of wine. The schnitzel was excellent, with the veal breaded with sesame, sunflower, and pumpkin seeds, and accompanied with a red current side (the way we in America might put a small dollop of cranberry sauce). There was also a salad of greens with small sliced and cooked potatoes in a kind of mustard sauce. All very good. For dessert I ordered a melange (basically the Viennese equivalent of cafe au lait) and some topfen (cheese) strudel. All of it was very good. Including tip, the whole thing came to about 20 euros, or about what I paid for dinner last night in Prague. I didn't get as much here, but then, Vienna is a more expensive city.

Tomorrow I head out early for Mauthausen. As much as I wish I didn't have to go and could stay here and museum hop (why do I alway book one day less in Vienna than I should?), this is an essential part of this trip. If I hope to take students there next year, I need to go there first myself. Unfortunately, while next year I will take a charter bus, this time I have to spend 2.5 hours on the train and then walk the 5km to the camp (and back). If I hope to have any time tomorrow evening visiting the KunstHausWien (open til 7pm, and half price on Mondays!) I need to leave here by 8:36.

To make this quicker tomorrow, I went to the train station tonight and bought my tickets for tomorrow. I also timed it so I know what time I have to leave the hotel tomorrow morning to make the train (I'm leaving directly from breakfast).

I assume you have visited the Vienna synagogue in the old Jewish quarter near the river which survived the Nazi era I think becasue it was in or near the same building block as the SS HQ so burning it down would have proved "inconvenient" for the Brown shirts on Krystalnacht (or some other similar story). Undistinguished outside but beautiful inside. The Holocaust memorial was also significant not because of it's symbolism but because of the empty beer bottle I found in the middle of the Star of David when I was there. Seems like some thug left it there deliberately. It was too centrally placed to be simple litter. Also when I visited the synagogue last time I was there I asked directions of several shjops it turned out within blocks of the synagogue in my broken German wnd when I said "where is the synagogue?" "Jewish?" i might as well have been speaking Martian. Amazing how unhelpful the local residents were despite the presence of a few Uzi toting guards just up the street I found out. Sigh....THAT made an impression as well. There is also a nearby plaque dedicated to Herzl that I belive was vandalized recently. Gotta love the Austrians, not all Von Trapps and Eidelweiss, eh? Don't get me wrong, Vienna has it's lovely parts too. The "plate" tour at the Hapsburg Palace was really interesting. Milching Fleishig and Parve dinner sets (about 200 of them) for a party of 200 please? I liked Salzburg better anyway. I stayed near the Westbahnhoff the last time I was there and I almost got arrested when a very nice Cocaine dealer almost got me arrested as he was giving me directions to my hotel. Otherwsie I felt pretty safe in Vienna I guess.