[A painting by Friedensreich Hundertwasser]

After a nice breakfast, I left this morning for my train to upper Austria. The ride was beautiful: we would pass through small, rural valley to forest-covered hills. For a while it looked like it would rain, but it eventually cleared.

After I arrived at the small train station, I passed up the chance to take a taxi, perferring the exercise of the 5 km walk. The footpath led through the small town and down to the Danube for about 3 kms. There were lots of cyclists, as this is one of the major cycling routes in the region. Eventually, the path wound through the rural outlying parts of the town and up into the hills. The path was shaded by trees, and there was the sound of songbirds happily chirping. Every now and then I would pass some chickens or sheep. Eventually I reached the top of the hill were I could get a clearer picture. 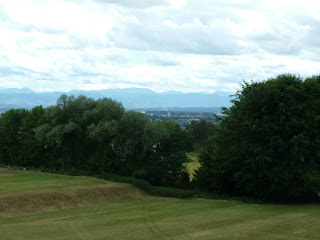 [View of upper Austria] (As you can see, I was finally able to upload a few pictures from my camera)

And when I turn in the other direction: 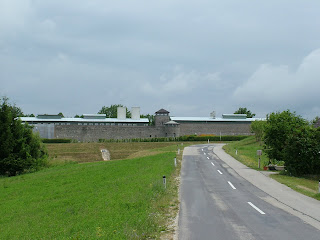 Just as it was in Poland, it is hard to reconcile such places of monstrous evil, cruelty and suffering in areas of such great peace and beauty. I suppose it´s a variation on the pathetic fallacy: we assume the natural world will reflect human actions and emotions. Instead, it is just juxtaposed against them.

This camp was opened after the Anschluß in 1938, and was intended as a punishment camp for political prisoners the Nazis wished to "exterminate through labor." Towards that end, prisoners were to be worked to death in the quarry. Once they died from exhaustion or some other punishment, their bodies were burned in the camp crematoria: 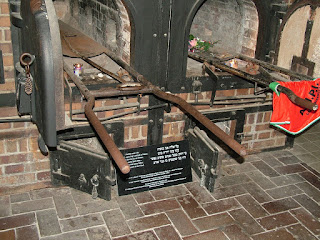 [one of the crematoria at Mauthausen]

The camp itself is quite small. Many of the barracks have disappeared, and the rest are undergoing restoration to save them. The museum is entirely in German, though there is a good audio guide to the camp. Surpringly, there is almost nothing vegetarian in the snack shop at the entrance. Those wishing to avoid unkosher meat (including in the pizza) should bring their own food.

After about an hour I headed back to the trainstation and to Vienna. I needed a break from the regimentation and destruction of the Nazi period, so I went to KunstHausWien to see their Friedensreich Hundertwasser collection.

There´s so much I would like to say about him, but I´m running short on time. Let me just say that whereas most post-war art sees itself as a critique of the evils of western society that led to the Holocaust and WWII, Hundertwasser wants to create art that imagines a future that moves beyond the totalitarianness of reason.

In his paintings, his architecture, and his writing, he embraces a holistic vision of humans moving away from the straight line and embracing the uneven, the curved, the green. Instead of bauhaus, he wants baumhaus; he has trees growing out of his buildings at each floor. He calls them "tree tenants," who pay their rent in providing shade, oxygen, and purification.

I think his art particularly appeals to children in that he very much in touch with his inner child. There is an immense playfulness to his work. This was very much what I needed after witnessing at Mauthausen what happens when adult rationality is taken to its horrific limits.

Here are some examples of his amazing creativity (downloaded off the internet,since no photos are permitted in the gallery):

After a very happy hour wandering through the gallery I had a quick bite to eat in their cafe. It has some very good reviews, but I guess I went their too late in the day. I enjoyed the cream of aspargus soup, but all their vegetarian specials were gone, so I ended up with some rather pedestrian pasta bolognese.

For dessert, I went to Cafe Hawelka near Stephansdom. This is a small, literary cafe, and by 10pm, they were only serving drinks. "No nachspeise?" I asked. "Buchteln," he answered. These are the specialty of the cafe. I ordered some and a melange.

The Buchteln are usually described as doughnuts, but they are more like large pieces of monkey bread. The filling tasted a little too sweet and a little too tart to be either chocolate or poppyseed, so I'm guessing prune. They were very good, as was the coffee. With the extra energy, I've been able to finish this post and do some research on Bratislava.

I'm also going to try to visit the Stadttemple on Wednesday, before my train to Budapest. There are guided tours at 11:30 am, and my train wouldn't leave until 1:52 pm, so it's doable, if I can find the place to get tickets.
Posted by J.B. at 10:15 AM