The Eye of the Sea

[Morksie Oko (the "eye of the sea" in Polish]

Some of you have had a few questions about my meal at Gundel and whether I have an expandable stomache. Let me assure you I ate a (mostly) reasonable amount. All the portions I chose were quite small so I could try a lot. For example, the desserts were each maybe enough for two or at most three bites. Basically, petit fours size. I also ate at a very leisurely pace, spread out over more than one and a half hours.

By the way, they offered me Crepes Gundel for dessert (their signature dessert), but I turned them down. 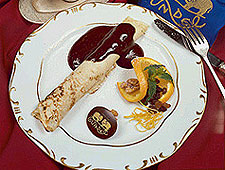 First, it was so large that if I had that I couldn't have eaten another thing. Second, I had the Bagolyvar version of it twice that week, including the night before, which was my last dinner in Budapest.

I made my train to Poland without difficulty. I used some of my last Hungarian forint to pick up a salami sandwich, a pastry, and some water for later on the train. I wasn't hungry when I bought it, but I knew at some point, I would feel hungry again.

As it turns out, it was a good thing I did buy them, since there was no meal service on the train.

When I found the sleeping car, the conductor asked for my ticket and receipt, and kept them, directing me to the appropriate cabin. I was a little concerned about not having any proof on me that I had paid (I went so far as to snap a picture of him so I could show any guards who had my ticket), but another passenger told me this was standard practice on sleeper trains.

The good news, by the way, is that I had the entire cabin to myself. In fact, there weren't any first class single cabins on the train at all, had I wanted to get one.

Around 9 or so I got in bed and turned the lights off. I figured I would just rest until we came to our first border crossing at 10:30, but I actually fell asleep. I was woken by knocking on the doors. I turned on the light and looked, and saw there were border agents going from room to room. I got out my passport and waited. "Passport Control!" I handed over my passport and it got stamped. Five minutes later, the Slovakian guards came by and we went through the same routine. Ten minutes later, we pulled out of the station, and the conductor came through and shut all our doors indicating it was safe to go back to sleep.

I stayed up a few minutes to see what Kosice looked like. This is a town in Eastern Slovakia, and is the region that my mother's family comes from. But in the darkness, you couldn't see anything, so I went back to sleep.

Again, I didn't think I would fall asleep, but two hours later there was that knocking at the door again. "Passport Control!" We were leaving Slovakia and entering Poland. I was sort of dazed and I asked the Polish officer to make sure my entry stamp was visible (I had trouble leaving Poland last time because they couldn't find the entry stamp). He showed it to me.

Now that there weren't any more disturbances for the rest of the night until we reached Krakow, now I had trouble falling back asleep. I woke up every now and then, but eventually slept until about 4:45 am. By then, it was fully light outside, and I got up and began to get ready for our arrival in Krakow 45 minutes later.

It's a short walk from the train station to the bus station to catch the bus to Zakopane, and by 8:30, I was here in Zakopane. My hotel is a short ten minute walk from the bus terminal, and my room has views of the nearby mountains.

[Stara Polana in Zakopane; my room is on the upper floor on the left]

I took care of business by changing money and buying pseudophed. Then it was off to Morskie Oko.

One of my primary goals in this trip to Zakopane was to visit this beautiful, high mountain lake, and I wasn't sure if the good weather would hold, so I decided to go there today. It's a 9 kilometer walk from the bus stop to the lake, but horse-drawn carts can go three quarters of the way, so I took a ride.

[A Polish horse-drawn cart; the one I took was not nearly as fancy]

We seemed to have two really slow horses, as all the other carts passed us, as we slowly crept up the path. I chatted with a young Polish couple from Gdansk in the cart with me. They live and work in Oslo, but were back on holiday. At one point, a hiker said something in Polish to the driver and I asked them what he had said. "He said our horse is frail." That's what I had thought he said.

The last 2.5 kilometers has to be done on foot. Then I came to this beautiful dark green lake, ringed by tall scarps (see photo above). I got lunch in the restaurant (chicken schnitzel for once, and, of course, beer). Then I decided to walk along the shore of the lake to reach the upper lake.

To get there, I had to climb a very steep path. In the space of thirty minutes, I had climbed 600 feet, straight up. The path was stone steps clinging to the cliff. While it was a very strenuous climb, the descent was far worse, as, in addition to the jarring damage to my knees, was the very real risk I'd fall. I remembered my hike last year down from Kasprowy Wierch was just as difficult, and I am reconsidering whether I want to hike down or just take the cable car both ways.

Back at Morskie Oko, I continued to walk around the lake, seeing the various waterfalls and streams that flow into the lake. There is nothing more gorgeous than the sound of water falling on and through rocks.

After that it was 3:30, so I needed to think about getting back down. Since I wanted to visit some of the waterfalls I had missed on the cart ride up, I know had a 9 kilometer walk stretching ahead of me, even though I was quite tired. About half way down, I tripped and fell on one of the stone stair shortcuts. Luckily I was wearing long pants (this is exactly why I wear them on hikes). Both knees were banged up, and it tore out the pant over the right knee, but no long term damage. I continued the rest of the way at a slower pace.

I'm back on the hotel, getting ready to take my laundry to their laundry room. Then it's off to dinner and a good night's sleep.
Posted by J.B. at 9:32 AM