The Canals of Amsterdam

Following up on yesterday, when I was so tired I couldn’t type straight, I had no difficulties picking my nephew up from the airport.  It was a clear, warm, and sunny day, so I decided to walk to the central train station rather than take a tram.  Not only would it help me with getting to know the neighborhood, it would also help me adjust to the time zone change by being in sunlight.

The train ride to the airport is very fast, faster, than the airport hotel shuttle.  The difference is that with the shuttle, you don’t have the added time and hassle of getting to the train station.  While I waited at the airport I bought some bread with nuts and raisins; it was sort of a cross between a pretzel and a hard roll.  Very tasty.

No trouble at all finding my nephew and we made our way easily back to the hotel.  My nephew was impressed by how scenic Amsterdam was.  Lots and lots of college-age students and bicycles.  So many bicycles that my niece told me that if she moved her, she would have to learn how to ride one.

After getting everyone set up in their room, I searched for someplace close by for us to eat.  The hotel gave us a list of recommended places, and this one, the Sluizer, had five stars.  It was a fish restaurant specializing in Dutch seafood dishes, and was a lovely five block walk.  I varied our walk to and from the restaurant so we could see the neighborhood better.  We crossed over a canal bridge and walked through two shopping streets.

The restaurant was small and lovely.  At first I thought we might be underdressed, but the host seated us in the window.  “The advertising spot,” my father said.  The host presented us with the special asparagus menu, and told us that this was the last week they will be having it as the season is almost over.  I almost got the asparagus soup, but my father and I split the stuff Portobello mushroom, which came with a salad of rocket, shaved parmesan, tomatoes, and walnuts (lightly dressed).  Dad and I both got the grilled salmon over a bed of white Beelitz asparagus, Shayna had the grilled salmon with a light green sauce, while Matt had the whole grilled Turbot.  We all immensely enjoyed our meals.

Afterwards, we made our way back to our hotel through Rembrandt Square, and took photos with the life-sized version of the Nightwatchmen.  It started to drizzle slightly so we headed home to bed.

I showered this morning, and I was surprised by the complimentary toiletries provided by the hotel:  peppermint shampoo, cilantro conditioner, and rum body wash. It’s just kind of an odd mix of smells.  The hotel’s breakfast buffet was nice, with a typical northern European emphasis on meats and cheeses and breads. The bread was excellent, of course.

After breakfast, we headed for the Anne Frank House by way of the flower market and Dam Square.  It was a little chilly, so my father went back in for his jacket, while we headed on our way (he never planned on seeing the Secret Annex with us – besides, it would have been very difficult to navigate some of the steep, narrow Dutch stairs).  The flower market was not as robust as I remember.  Maybe because today is Sunday; maybe because the last time I saw it was in springtime.  Shayna loved seeing the royal palace in Dam Square. 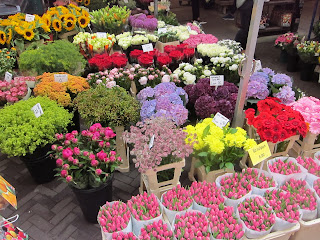 I hadn’t seen the Anne Frank house in probably 23 years, but I was impressed with how accessible it is now.  There’s a lot of information and context for the story of the Franks, and the use of timed tickets keeps it from being unbearably crowded (though it is still crowded).  Shayna was particularly moved by the exhibits and asked me if I could forgive the Germans for what they did.  I told her that only those who were hurt directly have the power to forgive; I can’t forgive on behalf of those who are dead.  That being said, I don’t have trouble being in Germany, and I would love to live in Berlin.

Afterwards, we walked back to the hotel the long way; I’m trying to see as much of the neighborhood as I can.  I’m glad I did because we found the café we went to for lunch.  I asked the hotel staff about two of the cafés we passed, and they immediately recommended Café de Bazel, located on the ground floor of the State Archive building.  Dad wasn’t hungry so only ordered an apple cider.  Matt and I both got the lunch special:  soup of the day (a spicy sweet potato soup) and a “toasty.”  His was the tuna melt; mine was a grilled cheese sandwich using a mild Dutch cheese.  I thought about getting the Elderberry juice to drink, but the waitress said many people find it too strong.  I ended up getting the pomegranate, but I asked if I could try some of the other on the side just to taste.  The smell was quite unpleasant, though the taste was simply acerbic.  Then I realized I was confusing elderberry with elderflower.  Now, finally, the insults screamed by the French soldiers in Monty Python’s Holy Grail finally made sense: “your mother is a hamster and your father smells of elderberries!” 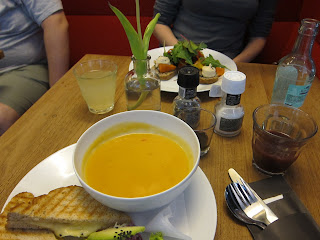 After lunch we caught the tram to the Concert-Gebouw, which is the stop nearest the Van Gogh Museum.  I asked if they had any concerts tonight, but no, they didn’t.  They were having an early afternoon concert of young talent, but we had no time to stay (they had a red carpet out).  I asked if I could see the elaborate chandelier in the lobby of the box office and they let me.  From there, we strolled through the park to the Van Gogh museum.  The sky clouded over and it was a little breezy. Shayna and my dad were a little chilly.

Our tickets were for 2:30 and it was only 2:10, but thankfully they let us in early.  We started with the special exhibit on Van Gogh and Japanese art, as this was the last day of that exhibit. Shayna was very excited by some of the nineteenth-century prints Van Gogh had acquired as models for study.  They had one video showing different aspects of Japanese prints that Van Gogh had adopted and used computer animation to highlight those aspects in various paintings on display.  It was quite fascinating.

From there we headed over to the main wing of the Van Gogh exhibit, but it seemed like everyone other than me was getting kind of winded.  Dad was very happy that they had The Potato Eaters on display, as he had spoken earlier about how much that piece had moved him the first time he saw it.  Shayna used the exhibit on draughtsmanship and Van Gogh to make a sketch.  Eventually, we headed down to the museum café to refresh ourselves.

I had had to check my bags, so I told everyone to wait while I retrieved it.  Unfortunately, I found that they wouldn’t let me go back into the area of the museum with my now unchecked bag!  I wasn’t sure how long this stand off would last, but the guard agreed to temporarily watch my bag as I raced up to the café to tell everyone to follow me down.

We had originally planned to rent paddle boats, but as the weather was chillier than we expected (the high was 65 today), we took a canal tour instead.  Shayna and dad sat in the enclosed area, while Matt and I sat in the outdoor section.  I enjoyed the fresh air and wanted to take pictures without obstructing glass.  She and dad napped for a bit and then later, Shayna came back to sit with us. I asked her if she wasn’t cold, but she said no.  That left dad sitting all by himself.

The canal tour is a great way to see the city and we all enjoyed it.  Shayna chatted for a while with some recent graduates of Notre Dame who joined our boat (it was a Hop On, Hop Off tour boat).  At Amsterdam Centraal Station, the bike parking lot is four stories high.  Later, we headed out into the harbor for a view of the city I had never had before. 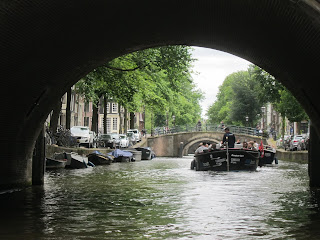 Back at the hotel, we took a 45-minute break while I located an Indonesian restaurant for us for dinner.  The desk clerk asked if I had ever been to Indonesia and I said no.  Because, he explained, if I had been, I might be disappointed in the food.  I said that was alright and we ended up going to Indrapura, a restaurant only 3 blocks or so from the hotel. 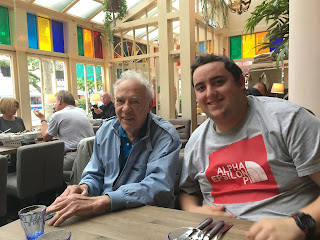 There, we ordered the rice table for four. We thought about getting two different ones, but the waiter discouraged us on the grounds that the table was small and tilted, and that number of dishes simply wouldn’t fit. What number?  Here’s what we ordered by getting just one: 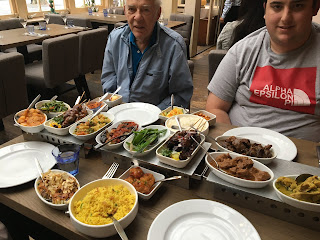 The food was good, though a little on the mild side.  Nothing was particularly hot or spicy.  Still everyone enjoyed the meal and we were very careful not to let the multiple dishes slip off the table on to the floor (as happened to the couple sitting at the table next to us).

Afterwards, we went for ice cream at a place near Rembrandtplein.  It was just across from a spectacular art deco movie house.

Tomorrow’s plan is for the free (except for tip) food tour in the morning, and the Rijksmuseum and paddle boating in the afternoon.
Posted by J.B. at 2:05 PM