Last night, Matt went to bed early as he wasn’t feeling well.  Unfortunately, that continued today.  As I explained to him this evening, most likely the problem isn’t really an illness at all.  Rather, his intestines are feeling put out by the new kinds of foods he’s been eating in northern Europe and decided to let him know how upset they are by going on strike.  I gave him two Imodium this morning (all I had), and we bought him a box in Tallinn this afternoon.

The good news is that evening he seems to be feeling much better.  His mood has improved, his energy level seems almost entirely restored, and his congestion is nearly gone.  He ordered rice and bottled water for dinner, and I brought him bananas and candied ginger from the main dining room.  Hopefully, his intestines will go back to work tomorrow and he can join us in St. Petersburg.

Shayna also wasn’t that happy this morning, but that’s mostly because she got so little sleep due to Matt’s snoring.  After breakfast, I suggested she take a nap in my room.  She got an extra hour while I did my morning “constitutional” of four laps around the promenade.  Meanwhile, I could see we had arrived in Tallinn and were being nudged into position at the pier.  Because of the heavy wind, our docking was delayed as the tugs were being used for another ship.  We eventually docked at 10:30, and people started going ashore.  I woke up Shayna and dad around 10:45, and we headed off to visit Tallinn, Estonia. 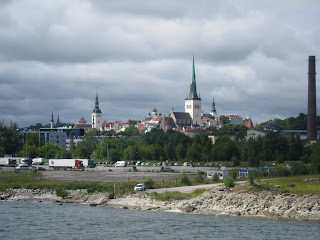 The old town was very pretty, and dad did ok on all the cobblestones.  He wasn’t thrilled at the idea of climbing up the hill to Toompea Castle, so he sat outside a church and we did a quick tour of the hill (just 30 minutes) before heading back to meet him. 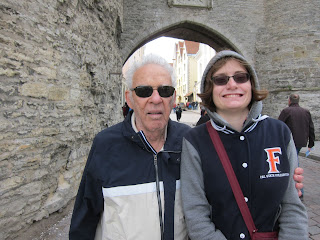 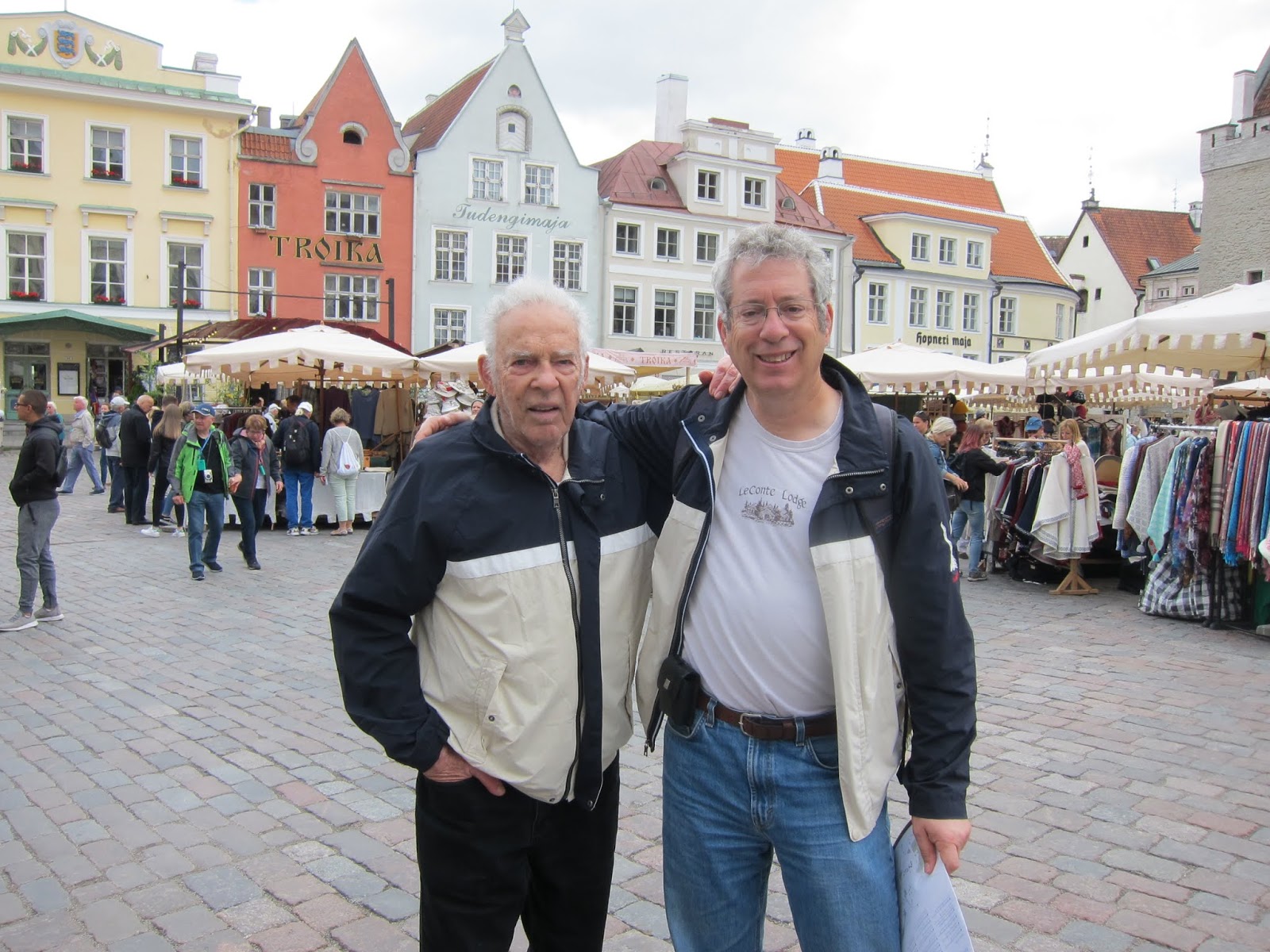 As we began to walk back towards the boat, the sky started to threaten rain. That’s when we found out that Shayna didn’t bring an umbrella on the trip.  When it started to drizzle, I suggested stopping in a café; dad reluctantly agreed, as he wanted to have lunch on the ship.  I ordered a pastry and cappuccino, while Shayna got a water and salmon sandwich.  By the time we were done, the rain had passed. 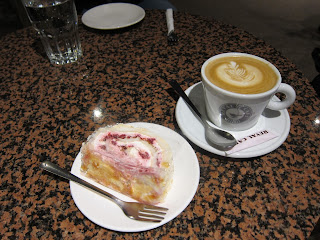 Then we made a detour into the new part of Tallinn to find a pharmacy.  Shayna was excited to see how “the common people” lived.  Dad was going to buy a new toothbrush to replace the one he lost in Amsterdam, but I told him I brought an extra (I did, really).  Then it was back to the ship.  Originally, Shayna was going to stay with me to explore other parts of Tallinn, but she decided to go back to take a nap.

I walked around the new town and the parts of the old town I hadn’t gotten to.  I had hoped to visit the Museum of the Occupations, on the Nazi and Soviet periods, but it was almost on the opposite side of the city from me, and after five hours of walking, it was just too far.  That being said, I’ve been aware of the Holocaust by simply how homogenous Estonia appears.  I’ve never seen so many blond people in one place.  I eventually concluded that if someone wasn’t blond, they must be a tourist or immigrant.

Estonia was one of the first countries where the Nazis succeeded in murdering the entire Jewish population.  At the Wannsee conference, Estonia (or Eßland) was listed as “Judenfrei” or “free of Jews.”  The only Jews I’ve seen were Israeli tourists in the marzipan store.  It feels a bit odd to be in a place where there used to be a Jewish community and not to see any trace or memorial to them.

Back on board, I checked on dad, Matt, and Shayna.  Everyone was supposed to be on board by 5:30, but there was one couple on Deck 7 who weren’t back yet.  At 5:35, they read their names over the ship’s loudspeakers.  From the veranda, I could see them running down the deck (well, as fast as you can run when you’re in your 70s).  After they boarded, the ship removed the gangplank.

After a light dinner in the dining room, I went to the classical concert while dad napped and Shayna went to the hot tub.  They announced on the loudspeakers that due to heavy winds and four large cruise ships arriving at the same time as us, our docking may be delayed tomorrow.  I let our Russian travel agent know and she’s pushed back the meeting until 10 am.  That’s probably later than it needs to be, but it’s better to be safe than sorry.