Tuesday's session started late. I haven't typed up my notes yet, so this will be a much shorter summary.

We started at 9:30 by meeting Avishay Braverman, an Israeli economist and former president of Ben Gurion University. From 2009 to 2011, he was Minister of Minorities. Much of his talk concerned his life and background and how he became an economist and then the head of BGU.

The meat of his talk dealt with the crises that the world is facing in general and Israel in particular: environmental degradation and growing income inequality. Unlike such inequality in the past, due to the internet and social media, this inequality is readily visible and is creating anger and frustration. And because of an overemphasis on short term thinking, CEOs of companies care nothing to the ongoing threat to the globe from climate change.

As for politicians, more and more populations look only to celebrities and journalists. He quipped that "Boris Johnson is a total egomaniac and narcissist," while "Mr Trump is not something to be respected."

In an interesting comparison with out speaker yesterday, he said that instead of Israel being a "start up nation" it's an "exit nation." As soon as someone begins a start up, "the same thirty people give the money" and the entrepreneur leaves. They need to stick around until at least the second stage and hire a 100 people. "Instead, they take the money and run."

Around noon we headed down to the Sorek Desalination plant, one of the largest in the world. Israel is leading the world in the desalination of water and once the next plant in Ashdod comes on line in December, Israel will be in the position of being able to not only begin to rebuild the local aquifers, but even to export water. 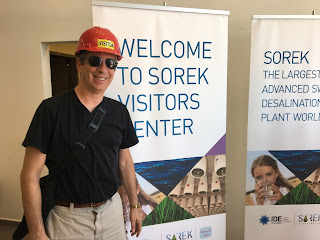 In addition to desalination, Israel recaptures 85% of sewage water for reuse in agriculture (as a result, most water used in agriculture isn't fresh water, but purified grey water). 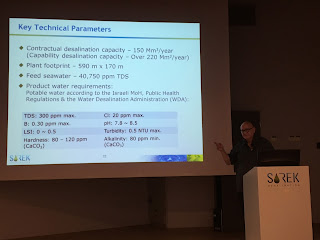 I asked about saving the Dead Sea (shrinking at three feet a year), and we were told that they already have issued tenders for the construction of a Red Sea - Dead Sea canal, beginning in Aqaba, and consisting of desalination plants and a hydroelectric project.  We also asked about the environmental impact of the discharge of brine back into the Mediterranean, and were assured, they are monitoring its effects on local fish. 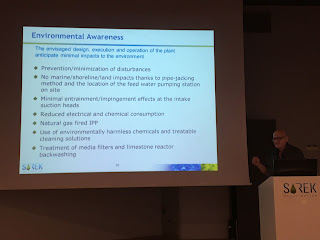 Then we toured the desalination plant (I keep wanting to use the word "desalinization" but that's not the right word): 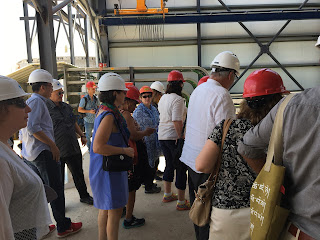 After the water is piped from the sea, the water is pretreated to remove various solid impurities.  I asked what was floating on top and was told it's algae. 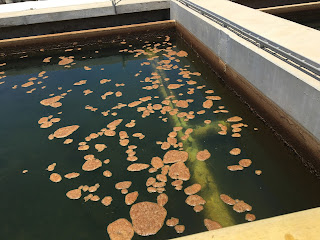 After the solids are removed, it goes through a process of reverse osmosis.  These gold-colored cylinders are the filters. 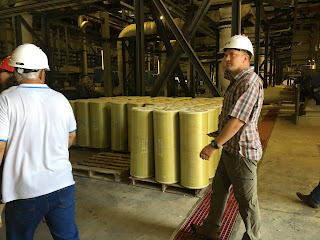 The space where the water is filtered is quite large.  They use gas turbines so I asked where they got theirs from:  Siemans. 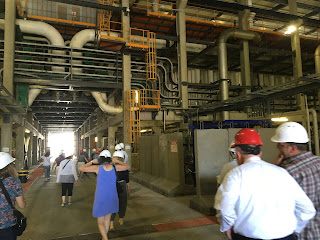 As the sign indicates, it's rather loud in this space (up to 871 decibels). 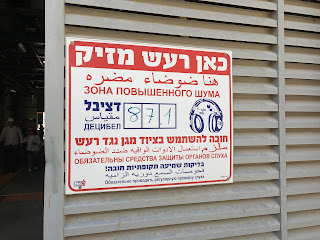 After touring the plant, we returned to Tel-Aviv, where I toyed with taking a short nap, but we only had 25 minutes before our next meeting, this time with Vered Swed, the former Director General of the Authority for the Advancement of the Status of Women in Israel. Until very recently, this office reported to the prime minister, but it was just moved to be under a separate ministry. 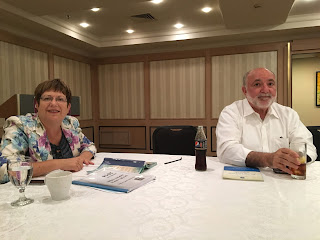 She talked very movingly about her efforts and her office's efforts to improve the situation of women in the work force, with particular emphasis on academia, and women in the Arab sector. She talked about trying to improve overtime rules that often have a disparate impact on women, denying them access to the opportunity to work overtime.

She's been very active in trying to get women appointed to policy committees within the government. They've created a database of specialists in order to address the claim that there are no qualified women in a particular area. She's also fought to make sure that women are appointed directors of public companies in equal numbers to men.

Perhaps her most heartfelt discussion concerned prostitution in Israel. While there has been a significant crackdown on the trafficking of women, this only affects women brought to Israel from other countries; it does nothing to affect local women forced into prostitution. She described examples of women who become prostitutes to escape abuse at home, and the various services they've created to try to help them leave this.

Our last session of the day was at Beit Daniel, a Reform synagogue in north Tel-Aviv. 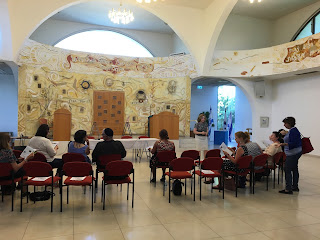 The panel consisted of Rabbi Meir Azeri, the Reform rabbi of this congregation, Mr. Yizhar Hess, the executive director and CEO of the Masoriti Movement (aka Conservative Judaism), and Dr. Ruth Calderon, a writer and former member of Knesset, who founded ELUL, the first Beit Midrash (study house) where secular and religious men and women could - together - study traditional Jewish texts. 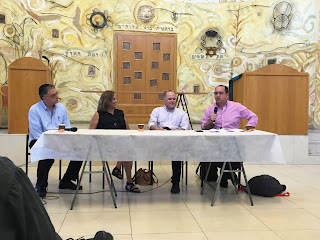 Klein began by noting the small size of the Reform and Masoriti streams in Israel, roughly 5% in the Pew survey.  Others on the panel thought the true number was slightly higher: 7%.

Calderon received her Ph.D. in Talmud at Hebrew University, and strongly identifies as secular.  The majority of people in Israel are secular, she stated, not halakhic.  Jewish books are very important in her life, "I cannot imagine not studying Talmud.  I'm not committed to the text halakhically, but it is my national heritage, our great books."

She founded houses of study not under the control of the rabbinate, which are open to everyone.  Many orthodox study houses are doubly closed:  to secular people and to women.  When she was in the knesset, she found an opportunity to bring back a Jewish practice: the shmitah or sabbatical year.  Originally, this was not only a year in which the land was supposed to rest, but also a time for forgiveness of debt.  Calderon proposed a bill, working with banks, to forgive the debt of about 5,000 bankrupt families.  The banks agreed because they would never collect the funds and it would give a group of people a way out of debt while bringing back this ancient Jewish custom.  The bill passed its first reading, but before the second one, the Chief Rabbi called and asked that the bill be dismissed, which it was.  Apparently, he couldn't abide a secular woman advancing a bill that was in any way based in a Jewish text.

In fact, in her maiden speech in the Knesset, Dr. Calderon discussed a text from the Talmud, the first time a woman had ever done that in the Knesset.  It caused a storm of reaction.

Rabbi Azeri emphasized the need for two institutions:  a kehilah (community) and a beit knesset (synagogue).  Modern, non-orthodox people still need a community to celebrate their events - their weddings and bar mitzvahs.  Even though they celebrate 220 bar mitzvahs a year in Beit Daniel (founded in 1991) and over 400 weddings a year (for which he could be arrested), they receive no financial support from the government (unlike every other synagogue).

Mr. Hess stated that this is a time of cultural revolution in Israel.  The Kotel (Western Wall) resolution is collapsing and the Mikveh (ritual bath) bill, which would bar non-Orthodox rabbis from using mikvot is advancing in the Knesset (this is to overturn an Israeli Supreme Court decision).  The paradigm in Israel is changing.  "We have a big chance to win the cultural war, but also a big chance to lose it."  He concluded by saying "we have a decade to identify if Israel will survive as a democratic entity."

After we got back, I met my friend Ofer, who was in graduate school with me at UCLA, and who filed his dissertation the same time I did. 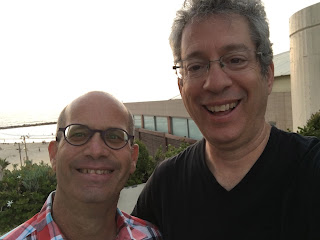 We walked along the tayelet (the beach promenade) about half way to Jaffa: 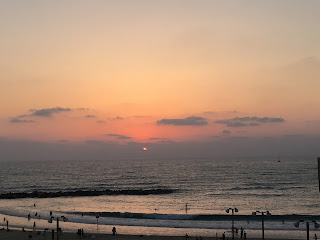 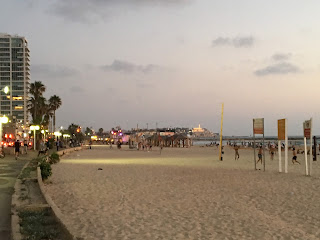 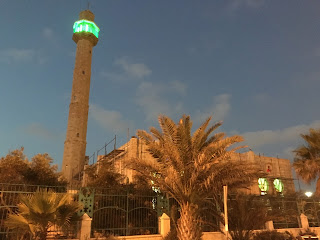 
He has a wonderful family here in Tel-Aviv, and it was great to catch up and also have some yummy Vietnamese food.  We walked to the Neve Tzedek neighborhood (built as a suburb of Jaffa shortly before Tel-Aviv was founded). 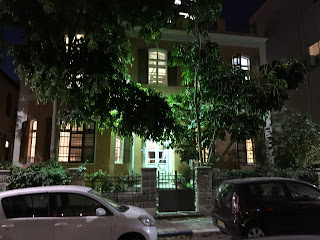 The humidity was relatively low last night (not dry, but not swampy), so we actually sat outside and ate. 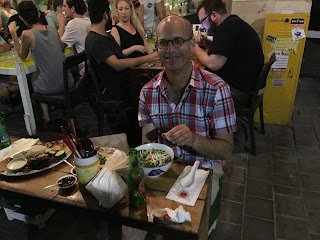 Walking back towards the original neighborhood of Tel-Aviv (built 1909-1912), I noticed this piece of street art: 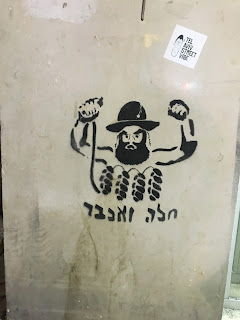 It's a pun on the Islamist terrorist cry of Allah hu akhbar, instead saying Challah v'Akhbar, meaning "challah and rat."  If you look closely, his "bombs" are actually loaves of challah (and instead of Islamic, he's hasidic). 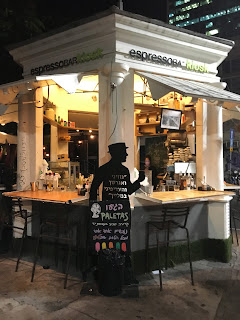 Walking down Rothschild Boulevard, we passed the first kiosk in Tel-Aviv (above).  Then I said goodbye and caught the #4 bus back to Ben Yehuda St and walked the few blocks back to the hotel.  Today is our last session and tomorrow morning, I fly back to the States.