Denali in the Rain

I didn’t think it would ever be night in Alaska, but the sun does set around 11:30 am and stays down until a little after 4 am.  The hotel rooms also have blinds and curtains, so the room does get dark.  As a result, I slept for over 7 and a half hours last night.  Today we needed to be on the bus by 9 am, and since I wasn’t sure how long breakfast would take, I planned on leaving for the main building by 7:30.  As it was we left a few minutes early.

Breakfast was fine, if unremarkable.  There was a wait for a table and when we were finally called, the waitress came to our table and said someone left a bag where we were waiting.  I was about to scold my father when I saw that it was my bag.  Ooops.

The agenda for today was really straightforward:  an eight-hour “tundra wilderness tour.”  We spent virtually the entire time on the bus.  This was mostly because it was a long drive on a dirt road (for the most part) until the turn around point, but also because of the weather:  it never stopped raining the entire day.  At some points, the rain reduced to a light drizzle, but mostly it was a steady rain. 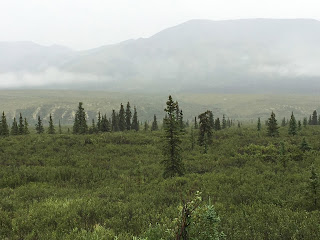 I chose a seat towards the back on the left side.  I hadn’t wanted the back, but the seats in the very front were taken, and the ones behind them had no overhead rack for storage.  Then the first seats that had overhead were over the wheel, so that meant we sat in the back.  Unfortunately, I chose the wrong side of the bus, but this wasn’t predictable.

The issue was spotting wildlife.  While the driver did spot things for us, much of her attention had to be focused on the road and keeping us safe.  That meant if we were going to see anything, we had to spot it ourselves, and two people on the right side of the best were very, very good at spotting things.  Since these were often high up on the hill and I was on the far left, it was very hard for me to see what they had spotted.

Early on, though, the guide found us a moose cow (a female moose) near the road, and she actually got quite close to us.  I thought that was an auspicious start and, in fact, we did see a lot of animals, just some of us saw them more easily than others. 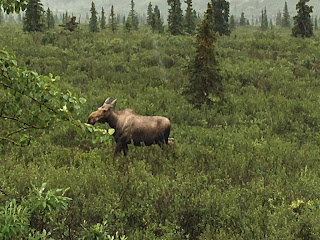 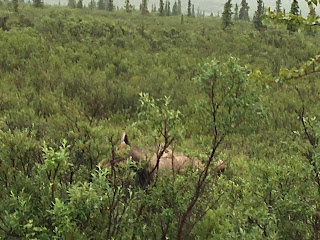 It started when they spotted a mama grizzly with cubs.  I convinced my father to move forward and I leaned over and bent down and finally saw her.  She was large, golden brown, and midway up the slope.  About 10 minutes later they spotted another grizzly.  I finally saw it and two of its cubs, but dad kept asking where it was.

Eventually I got tired of craning my neck so took the opportunity to photograph the wilderness on our side of the bus (when the bus was stopped I could lower the windows for an unobstructed shot).  I noticed a dark spot near the top of the hill opposite and asked the woman behind me, who had binoculars, to check it out. She wasn’t much help though, and offered them to me.  Unfortunately, I couldn’t figure out how to focus them (and they make me nauseous when I do), but I kept asking people to look and finally someone asked the driver and she said I had spotted a large bull caribou.  Yay! 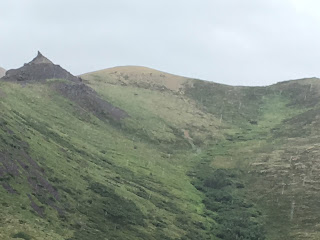 
In case you were wondering about the difference between caribou and reindeer, the answer is that the former are wild and the latter are domesticated.  Otherwise, they look exactly the same.

After much effort, I was able to point out to dad where the caribou was.

As we drove on we learned about how the permafrost is melting leading to “drunken forests” (where the trees are all wildly askew because their roots can’t hold on to anything).  It’s also leading to taller trees as they have more soil to grow.  I have to say that tundra isn’t how I imagined it.  I know I’ve seen nature documentaries where the caribou graze on green shrubs, but someone I thought it would be white or grey.  In fact, it was quite green.

We had our first bathroom break at the Teklanika Rest Stop. There, we stood in the light rain and saw the Teklanika River, one of several we crossed today.  The river is called a “braided river,” because it moves about in a wide, rocky channel.  Because it’s fed by glacial runoff, the water is a murky white as it’s filled with fine silt particles suspended in the water that were originally in the glacier. 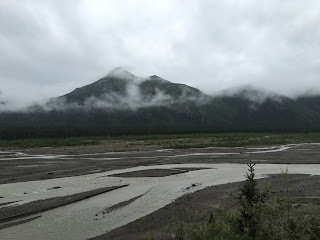 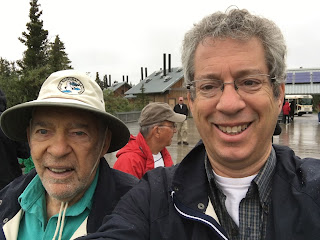 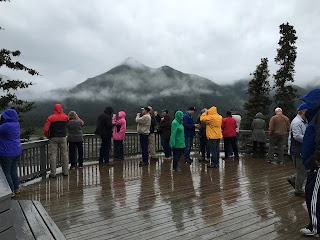 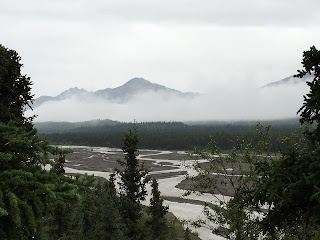 As we headed over Sable Pass the driver spotted a family of Rock Ptarmigan, the Alaskan state bird.  The male stood watch, as the hen and chicks moved across the road. 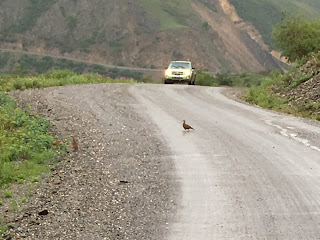 The next part of the road took us up the Polychrome Overlook, a windy mountain road with multicolored rock cliffs (hence the name).  The couple sitting behind us on the bus are from northern Wisconsin.  We had met them in the hotel in Fairbanks and they will be with us on the cruise.  It would be nice if I could remember their names.  Anyway, she had a fear of heights, so kept her eyes closed (though we were driving on the mountain side).  Given the rain, the driver delayed stopping at the overlook in the hope the weather would be better on the return journey.  Then we descended to our last major river:  the Toklat.

Here we had a longer rest stop as there were not only bathrooms but a bookstore/gift shop.  Despite the rain, I wanted to get up close to the river.  With all the added water from the rains, the current was swift and loud.  I recorded its sound on video.

Rather wet, I went into the bookstore and we were chatting about McKinley’s fate.  He used to be known for the mountain and being shot, but now he’s only known for the mountain.  “And the Spanish-American War!” said the guy running the concession.  “That’s how we got Puerto Rico, and American Samoa!”  “And the Philippines,” I added, “and Guantanamo.” 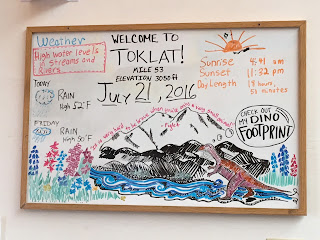 As we left, the driver spotted a large male grizzly walking by the water.  This time it was on the left, so I was in good position.

Male grizzlies are much browner than the females.

A little further on we saw a female grizzly with at least two cubs walking on the bank across the river.  Altogether I think we saw four or five adult grizzlies and perhaps more cubs.  That might not seem like a lot but there are only three hundred and something grizzlies in the entire two million acre park.  We saw about 4% of the total population.

The further into the park we got, the worse the weather became.  By the time we reached the turnaround, where we were about 38 miles from Mt. Denali and where, on a clear day, we should have had a stunning view, we could see nothing but rain and mist. 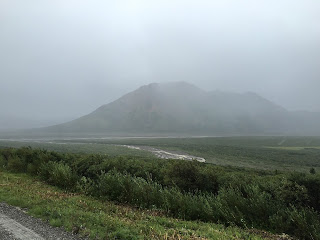 On the way back, we stopped at the Polychrome Overlook and, despite the rain, I got out and saw the view.  Despite the weather, it was pretty spectacular.  Dad, however, was getting rather tired.  Because of his vision issues, it’s hard for him to see many of the animals, which despite their large size, were too far away from us for him to see clearly.  “We should have turned back awhile ago,” he harrumphed. 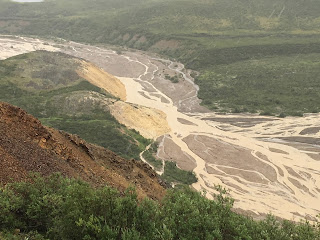 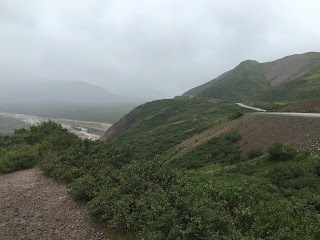 The road over the pass 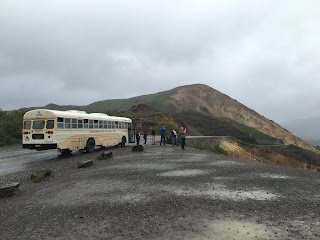 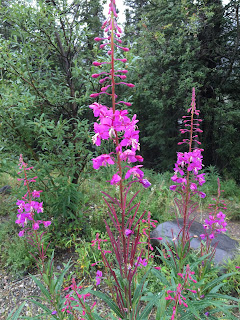 Fireweed:  the last wildflower to bloom and the sign that summer is almost over

We spotted more caribou and moose on the way back, but no Dall Sheep (though we were told that the sheep would most likely look just like white blips in the distance).  We returned to the lodge a little after 5:00 pm, which didn’t give me much time to eat before my 6:00 pm photography excursion.  After making sure my father was on the bus to the Canyon Lodge where we’re staying, I ran and got a crispy fish sandwich for dinner, wolfing it down as fast as I could.  I needn’t have bothered.

When I got back to the main entrance, there was no sign of my tour.  I checked in with the tour receptionist, who suggested I wait.  When they still hadn’t come by 6:10, she called it to find that it had been cancelled.  I went to the front desk to get a refund, and then headed back to the cabin to surprise dad.

As it happened, he surprised me by meeting me in front.  He wanted to get dinner, so I went back with him to where I had eaten, and he had reindeer stew, while I had a beer.  Meanwhile, dad complained about my having signed him up for the tundra adventure.  I told him I hadn’t, that this was part of the land portion of the cruise, but he insisted he had paid $90/person.  I dug out the email confirming the excursions we purchased and showed him the tundra tour wasn’t on the list.  The $90 excursion was the covered wagon and backcountry dinner we had yesterday.

Meanwhile, dad informed me that there was a note in our room saying that my strenuous backcountry hike in Denali Park for tomorrow has been cancelled due to low enrollment.  That leaves me with nothing before 6:50 pm tomorrow night, when I get to hang out with husky puppies.  I asked about the Denali National Park visitors center, which does have ranger-led tours.  I’m going to call them in the morning to find out when they are.  There may be another walking excursion; I’m trying to get more info on it.

Since none of the desserts in the restaurant appealed to dad, who didn’t want either chocolate or vanilla ice cream, the waiter suggested an ice cream parlor across the street.  This turned out to be a bit more of a walk than I anticipated, and I had to convince dad to stick it out a little further until we finally arrived.  He asked for mocha, but it turns out they call that flavor “espresso explosion.”  Thankfully, it was just mocha.  I had rocky road.

Tomorrow remains up in the air.  Hopefully, it will work out.

Meanwhile, here's the closest we have to a sunset at the lodge: 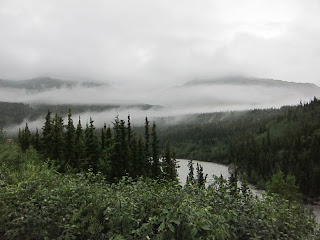 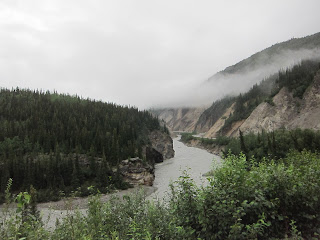 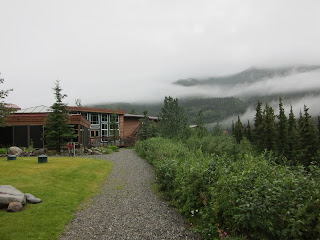