A Final Day and Flight Home

The morning of our last full day began with a meeting with Yael Ronen, a prominent Israeli attorney focusing on questions of sovereignty.  Instead of doing a presentation, she simply took a bunch of questions and then tried to answer as many as she could. 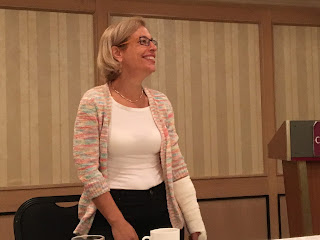 Israeli law make no distinctions between Jews and Palestinians.  However, there are laws regarding institutions, and those institutions do make distinctions between Jews and Palestinians (see, e.g., the Katzir case).  In general, though, the court has avoided the question of communal rights.  Jewish communal rights are recognized through the designation of Israel as a Jewish state, and, in particular, through the Right of Return.

Israeli law also recognizes that the West Bank is occupied territory.  Basic law that governs the territories is the Hague Regulation of 1907.  Occupied territory is defined as territory under the control of a power hostile to the local population.  It covers the powers of the occupier, as limited by the interests of inhabitants.

The second applicable law is the Geneva Convention of 1949.  Most lawyers agree that this simply adds additional norms to the Hague Regulation, and doesn't change the definition of occupation.  The Israeli position is that the Geneva Convention defines occupation differently and doesn't apply to the West Bank. Since Jordan never had sovereignty over the West Bank, Israel didn't occupy it from a sovereign power.  The rest of the world rejects this argument.

As a result, Israel law does not apply in the territory.  The rules applying to the West Bank are Jordanian law (often based on Ottoman and Mandatory British laws), as modified by military orders by the Israeli army.  As for the settlements, there are two orders that regulate their life in such a way as mirror Israeli law.  As a result, Israelis in settlements feel like they are living in Israel, but in fact, they are still living under military regulations.

In 2005, for the first time, the court struck down a military regulation.  When the IDF wanted to arrest someone but was fearful that the suspect would harm civilians, they would ask a neighbor to warn the residents of the house to leave.  The court held this was illegal under international law, due to the potential danger to the neighbors, and that this was not a free choice.

Ms. Ronen's talk was followed by Mr. Daniel Reisner, who had served as Israel's chief lawyer in the peace negotiations with the Palestinians and Jordan.    He had drafted the Israel-Jordan peace treaty and advised all prime ministers from Rabin to Netanyahu.  In 2010, he was involved in secret negotiations with Syria, which were going well until Syria disintegrated. 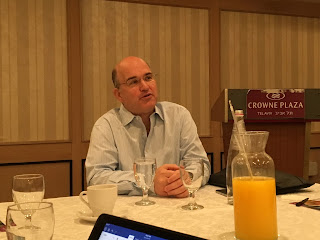 Mr. Reisner described himself as a cynical international lawyer, and had amusing examples of how international is (or often is not) crafted.  Referencing a Supertramp song from 1979, he described international law with the lyric "take a look at my girlfriend, she's the only one I got."  He also said it was like "the Swiss cheese without the cheese."

He then presented the legal argument as to why the occupied territories were not legally occupied.  I will spare you the sophistry. When it was time for questions I said the following:

"I disagree with your argument intensely, but it's not my role here to argue with you and convince you you're wrong, but to listen to you."  We had a short exchange where I disputed his assertions, and then I stepped back.  One of the other Brandeis participants thought I should have gone after him more, but I didn't think anyone would learn anything, and besides, I wanted to leave time for others to ask questions.

Our final session of the morning, and the last formal presentation of the trip was one of the best:  the noted Israeli author Edgar Keret.  He told us a little of his life and how he got into writing.  He joined the army at the age of 19 and "I was a horrible soldier."  He was often confined to the base for insubordination, and that forced me to read whatever books the commanding officer had.  He read Kafka and Kurt Vonnegut, and reading both gave hime the belief that he could write. 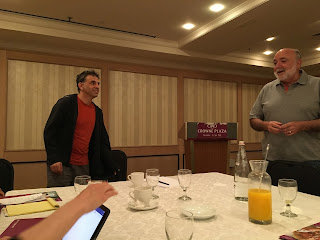 He read us one of his more famous stories:  "The Bus Driver Who Wanted to be God."  It's a funny, but also insightful short story that both amused and made you think.

Many of the questions focused on his use of language.  In Israel, most commentators focus on his use of colloquial Hebrew, while most foreign readers look only at the plot.

In the afternoon, we went to the Tel-Aviv Museum of Art for a guided tour of some fascinating contemporary pieces.

One of my favorite pieces was a Michael Helfman's reimagining of Felix Nussbaum's final painting before he was captured by the Nazis and murdered in Auschwitz:  "The Dance of Death": 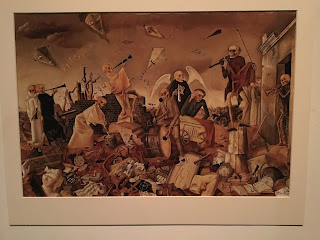 One thing you can't see in the photos below is the music playing in the background:  a distorted, jazz rendition of the British WWII-era song:  "The Lambeth Walk" 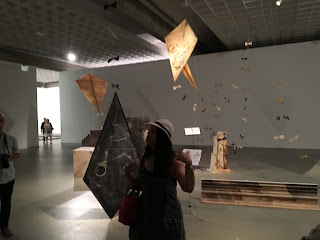 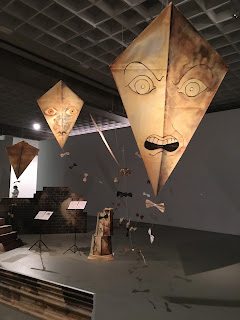 We also saw a special exhibition of the work of David Tartakover, a very political Israeli artist, whose politics are an important part of his work. 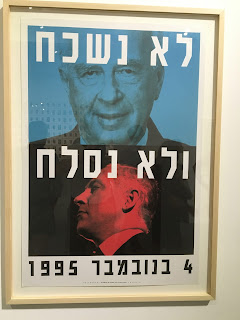 The top photo is of Yitzhak Rabin, the bottom is of Bibi Netanyahu.  The text says "Never Forget, Never Forgive," and the date of Rabin's assassination: 4 November 1995. 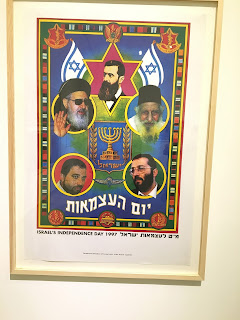 This one caused me to laugh out loud.  With Herzl's photo in the middle and the words "Independence Day" at the bottom, the images are of (from upper left in clockwise): Chief Sephardi Rabbi Ovadia Yosef, Moroccan Jewish mystic Baba Sali, the Shas Party political head Aryeh Deri, and the Russian-Jewish politician Avigdor Lieberman.  One other participant, though, concluded that the artist "clearly hates eidot ha-mizrach" (Mizrahi Jews).

They also had some art he collects on display including this very funny poster: 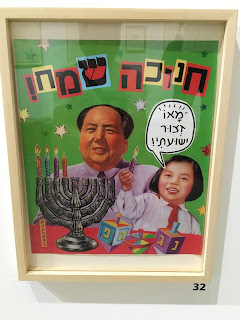 The title reads "Happy Hanukkah!" and the word bubble puns on the Hanukkah song Maoz Tzur, rephrasing it to read "Mao, the rock of my salvation."

There was also a really fascinating exhibition of the work of Maya Zach, who explores question of language and memory.  She also had a really moving experimental film (which, unfortunately, I can't post here). 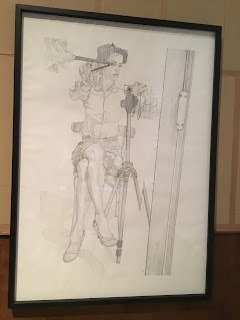 One of the final pieces we looked at was called "Mineret of Defense by the Zak Group: 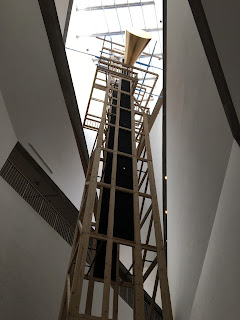 This piece evokes the Israeli military headquarters across the street in Sarona. 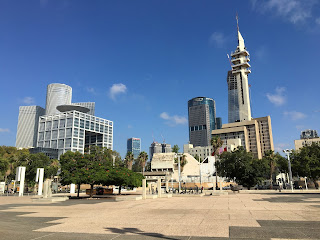 Afterwards, several of us went swimming in the Mediterranean in the beach by the hotel, and then in the hotel pool.  Then it was early to bed for our 4 am walk up call.

Currently, I'm in Boston, having flown first 4.5 hours from Tel-Aviv to Frankfurt, and then 7 hours from Frankfurt to Boston.  After a 4 hour layover, I have another 6 hour flight to Los Angeles.  This will be a very long day.
Posted by J.B. at 3:11 PM