The days on this program are very, very long and it's beginning to take its toll.

It would be great if we ended at 5 pm and then had some time to run errands, visit shops, or just relax.  Instead, we usually have an evening program that takes us until 7:30 pm, at which point we have dinner.  As I write this it's 8:30 pm and I'm now free for the night.  Unfortunately, we need to leave the hotel tomorrow at 7:30 am, so we are getting a 6 am wake up call.  I'm already feeling a little sleep deprived, so there's no way I'm walking back to Tmol Shilshom tonight.

One effect of this is that I've had almost no time to actually enjoy being in Jerusalem.  I really don't have a feel for the city or being here.  I'd be sad about it, but I'm too tired to really process it.

Today, our program started at 8:30 am with a briefing and then we were joined by Daniel Tirza (a retired colonel from the Israel army), who was the man who designed and built Israel's security barrier.

He began by taking us to Gilo and giving us his version of the events that led up to the decision to build the barrier.  It was a very hot day with no breeze, but a few of us got a little shade under a small palm.  Meanwhile he went on about the various towns we were seeing. 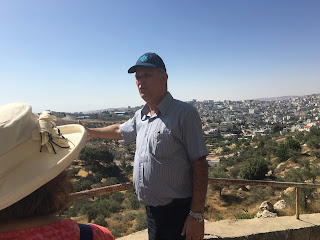 We could see where the barrier changed from a fence to a wall.  The town just beyond the wall is Bethlehem.  To the right and closer to us was the Ayda Refugee camp (though it is built-up houses, not tents the way one imagines), and on the right was the town of Beit Jala. 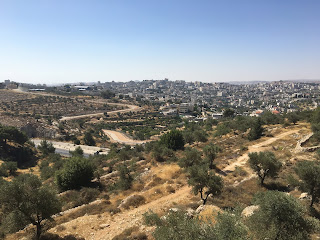 He also told us about first taking Senator Clinton, and later Senator Obama, to an observation point just down the hill from us.  Clinton, he said, congratulated them on the barrier.  When he came, Obama wanted to know why the barrier didn't run right along the border rather then as it does, some distance inside Palestine.  Danny explained that the extra distance was needed in case someone jumped the fence.

From there, we headed to one of the checkpoints in the barrier.  This one is adjacent to Rachel's Tomb.  The main gate for Jewish pilgrims going to the tomb is a road with a large gate: 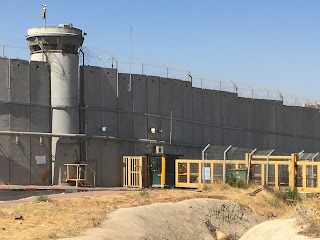 Danny held court, explaining why the wall is concrete here, why it's 9 meters high etc. 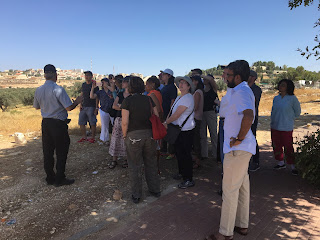 We also saw the checkpoint for Palestinians with permission to enter Israel.  They pass through a complicated system of stages in which they are checked for weapons or explosives. Once they pass through, they walk out and can catch a public bus to their destination: 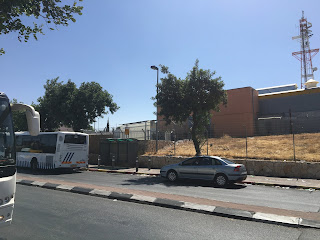 From here we headed back to the hotel to drop him off and we picked up our Palestinian guide for our trip into the West Bank:  Ibrahim. 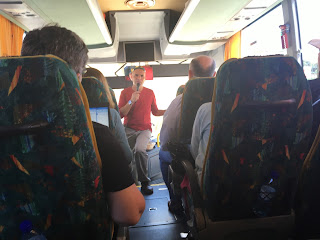 Israelis are not allowed to visit certain places on the West Bank to which we were going, so she got off too.

We entered the West Bank without difficulty, picked up our security detail, and headed to the town of Rawabi.   This is the first planned city on the West Bank, and they are spending a fortune on it.  I say they, but in fact, it's all private money. 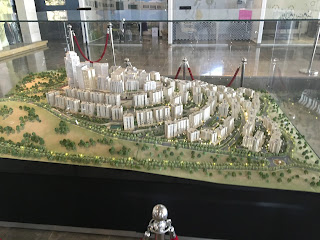 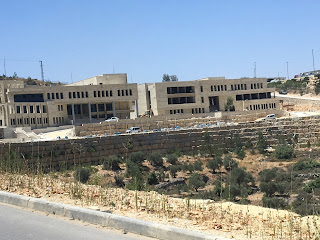 These are two of the three that are under construction.  The one on the left will be private, based on the British Cambridge model; the one on the right will be public.  The intend to have the schools finished by the start of the fall term in September.

Here is the medical center: 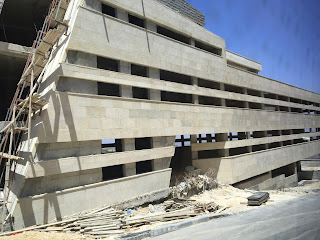 I was immediately struck by the size and repetitiveness of the housing units.  I found them vaguely Stalinist. 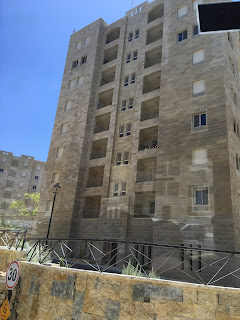 Only 250 families have moved in so far, but they expect a lot more by the start of the school year.

While the overwhelming impression of the place is stone, they are designing some green spaces too: 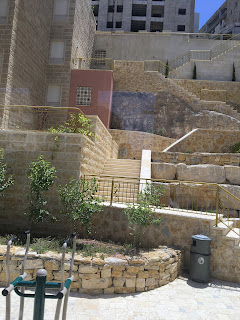 We drove to the lowest level of the current development to the area set aside for entertainment.  It includes an amphitheater and performance space: 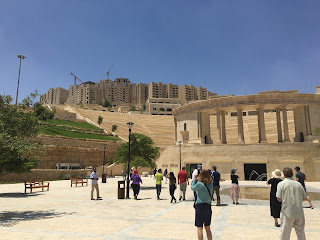 They're also building a soccer field and water park.

Water actually turned out to be a huge issue in getting this development off the ground.  For four years, construction was blocked by Israeli government decisions to deny the new town any water.  It was only resolved 14 months ago.  One of the groups lobbying against the project was the nearby settlement of Ataret, which now has to look out and see one of the largest Palestinian flags in the world. 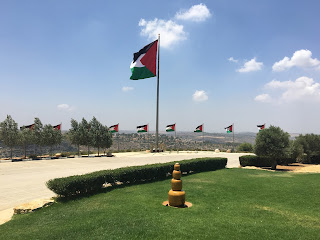 After meeting Bashar Masri, the wealthy Palestinian driving this project, we headed over to Ramallah to for lunch with Professor Khalil Shikaki (actually, since it's still Ramadan, we had lunch and he just spoke). 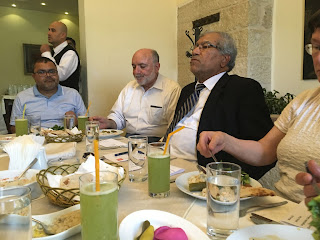 Dr. Shikaki had a fascinating discussion about the views on the Palestinian street, the lack of the support for the Palestinian Authority, and the disunity of Palestinian politics.  Perhaps tomorrow I will have the strength to add more details.  For now, all I'll say is that the one man who could perhaps unite all the Palestinians in Marwan Barghouti (currently in an Israeli jail), but that the PA would do everything it could to keep him from coming to power.

We were running late and so we raced over to the settlement of Ofra to meet one of the leaders of the settlement movement:  Israel Harel.  He first took us up to see an illegal (my term, not his) settlement called Amona, which the Israeli Supreme Court has ordered removed by October.  Ten years ago, a more permanent version of the settlement was destroyed after a similar court order. 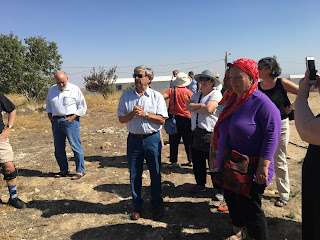 Later we went to his settlement of Ofra just down the hill.  On the way, we saw some ayalim (gazelles): 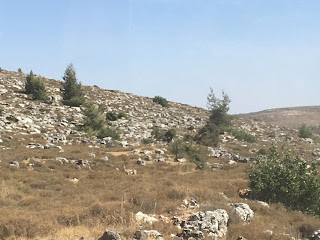 (They're young ayalim, so you'll need to look for camel-colored animals about two-thirds of the way down the photo and just left of center).

By the time we got back to the hotel tonight, I was just wiped.  We have an early departure tomorrow, so I'm going to post this and then start to pack.