Back to the Museums

Another Saturday off and another chance to tour Boston art.

I had to take care of some banking business and in the process found some more pieces from the Museum of Fine Arts' Mega Cities Asia exhibition.  The famed Chinese artist Ai Weiwei put together a piece evoking a famous water clock made by Jesuit missionaries for a Qing Dynasty emperor.  It was later looted by European powers in 1860.  The sculptures depict the Chinese zodiac, and these animal heads have a decidedly threatening, ominous feel.   Even man's best friend looks like he's about to bite. 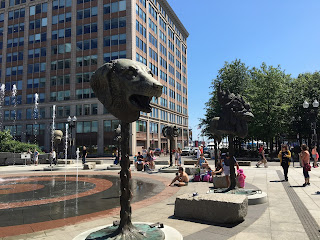 The other animals are similarly menacing, like the pig and the rat: 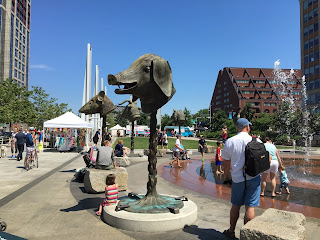 Ok, so sure, one expects a dragon to be dangerous, but a rabbit?  It's hard to make out, but up close you can see the bunny in the back is baring its teeth. 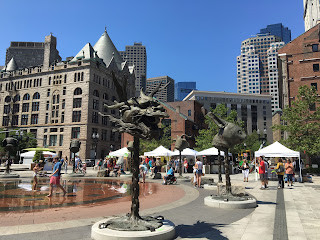 Back in the Museum of Fine Arts, I checked out some other parts of the Mega Cities Asia exhibition tucked away in different parts of the museum.  These included this really intricate piece by Wu Jian'an, from Beijing: 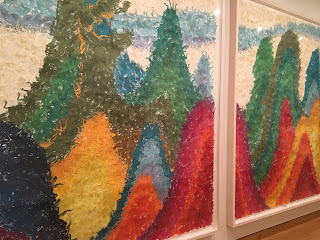 This image is actually composed of paper cuts:  small pieces of colored paper, cut into shapes: 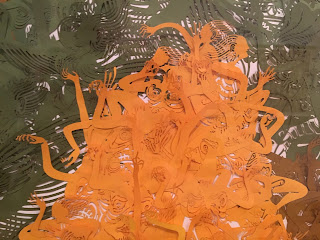 It's quite intricate and complicated: 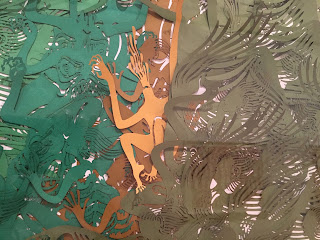 One piece I'm glad I didn't miss was Choi Jeong Hwa's Chaosmos Mandala.  A Korean artist from Seoul, he coated the walls of the room with mylar, suspended a brightly colored chandelier (which rotates), and then set up a chair and invited people to have their picture taken in it: 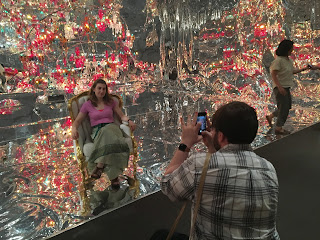 I also found another piece by Ai Weiwei that I walked passed last week but didn't notice as it was on the ceiling: 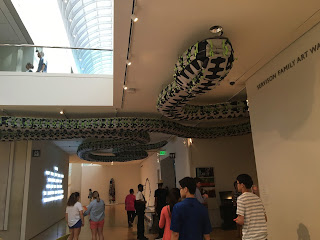 Around 3 pm I left the museum and walked a few minutes away to the Isabella Gardner Museum.  I think their most famous piece is John Singer Sargent's El Jaleo.  I think I saw this piece in D.C. in the early '90s when the Gardner was being renovated: 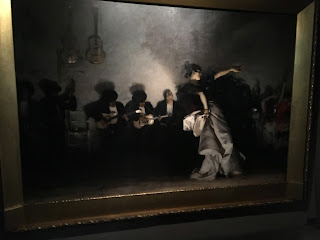 As beautiful as the art though, is the atrium garden in the center of the museum. 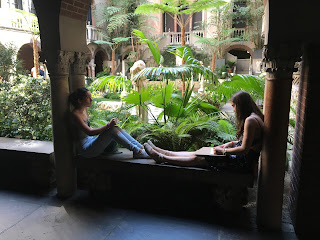 At the center of the garden is a Roman mosaic of Medusa: 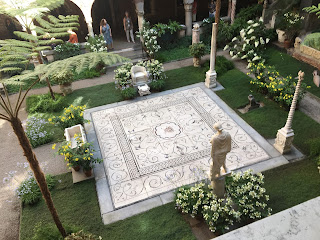 And here's a close up of her head: 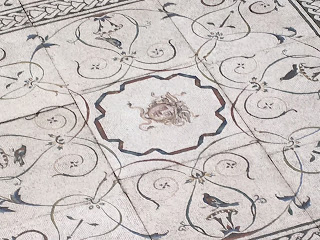 I toured the various wings.  Unfortunately, I had left my regular glasses at home, so I had to choose between clean lines and off colors, or proper colors and blurred lines.  Here's a portrait of the collector herself: 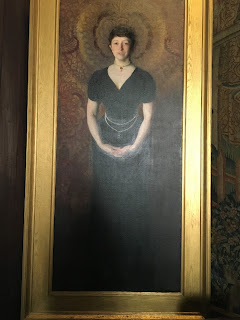 I won't inundate you with every photo I took, just a handful of things I particularly liked, such as this Meissen china set table: 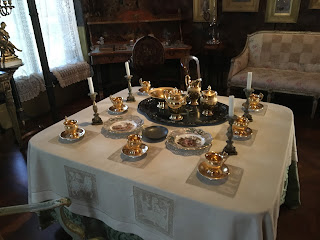 Or this Renaissance-era lute player: 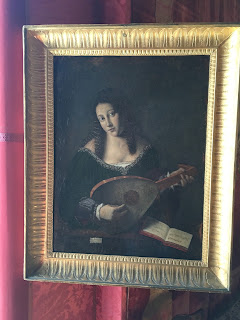 Or this Japanese tapestry (this was on the second floor, which was closed for conservation; as a result, I don't know anything about it): 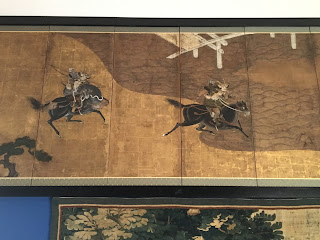 As I mentioned, the second floor was closed, but they moved 25 of the most famous pieces to the new wing.  They included this appropriately terrifying portrait of the Archangel Micheal by Pedro Garcia de Benabarre (1455-1483): 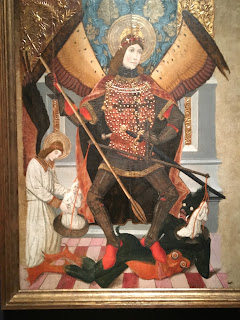 I also really like Bottecelli's The Tragedy of Lucretia.  Here's the full panel: 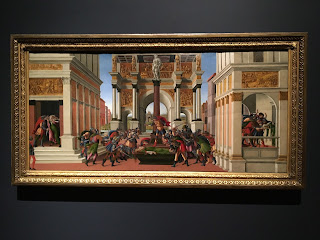 But the details are what's really interesting.  The painting has three parts.  Parts one and two are on the left and right, with part three dominating the middle.

Part one shows the rape of Lucretia, a Roman noblewoman, by the son of the last king of Rome:

In the aftermath, she commits suicide by stabbing herself in her breast.  In part two, her body is taken out of her house: 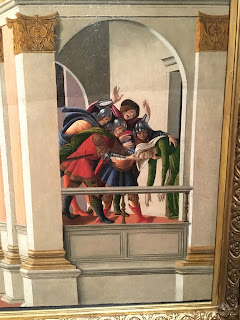 Part three, the funeral oration, dominates the piece.  Here, the mourners rally the populace of Rome to overthrow the Tarquin dynasty and create the Roman Republic. 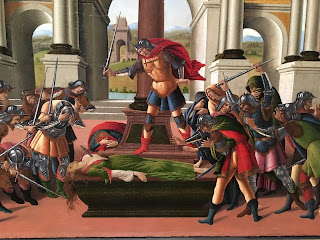 That was it for my art excursions.  Tomorrow afternoon, I fly to Israel and Monday night I should be in my hotel in Jerusalem. Hopefully sleeping.
Posted by J.B. at 7:05 PM