Finally, a decent night's sleep: I went to bed at 11:15 and woke up at 8:20.  Unfortunately, I still have a huge sleep deficit to make up after losing so much on the flight and then the poor sleep the next two days.  Spent a leisurely morning catching up on work and then headed over to the DDR Museum.  This is one my favorite museums in Berlin.  I didn't go last time I was here and I missed it.  Some people accuse it of engaging in Ostalgia (nostalgia for East Germany), but I think they do a pretty good job of capturing daily life under the dictatorship.

While they have lots of displays on the Communist Party, and the Wall, and the army, and the secret police (they've expanded a lot), what I particularly like are the images of every day people. 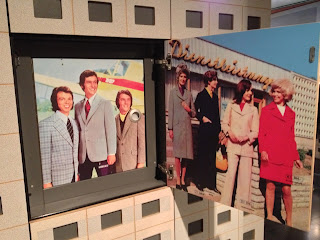 They just tried so hard to look hip; most of the people ended up looking like used-car salesmen from Nashville in the 1970s.

And what about this living room:  the height of East German style in 1984. 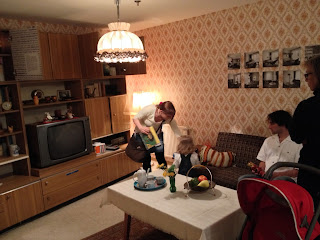 One of the students asked me yesterday what my favorite city on this trip is.  While Prague is probably the prettiest (as long as it isn't humid and boiling), Vienna is the most opulent (though rather cold at the same time), and Budapest the most convivial (with its communal spas), I think Berlin remains my favorite.  The first time I toured central Europe I was struck by all the things I recognized:  the Jews who came to Israel brought their favorite parts with them.  They brought the cafés and konditoreis, the kiosks and intellectual culture, the art and music.  Wandering around Berlin, you can see what the Jews loved so much and what they tried to take with them when they left (or fled).  At the same time, I probably end up speaking almost as much Hebrew as German with all the Israelis here.    There's something about this city that continues to draw Jews.  Sure, there are Israelis who go to Paris and London, but there's no website called Olim l'Paris (literally using the verb to immigrate to Israel) while there is one called Olim l'Berlin.    More so than any other German city, Berlin remains cosmopolitan.  It's the most unGerman city in Germany.

I met up with the students in the afternoon and we went to visit Mauerpark.  Along the way we stopped off at the remnants of Berlin Wall.  Mauerpark hosts a huge flea market on Sundays, and I wanted to look for some books for my niece. 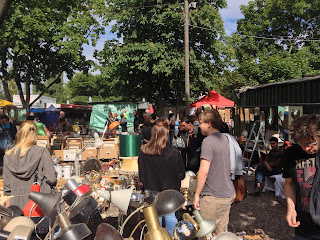 I found a book stall and among other things, they had a whole bunch of plays in Germany, including Lessing's Nathan der Weise.  As it happens, I've been reading Amos Elon's The Pity of it All, about the history of German Jews, and I was reading his chapter on Mendelssohn.  Since Lessing modeled the character of Nathan on Mendelssohn, I figured it was beshert (to use a Yiddish phrase) for me to buy this for her.

Afterwards, we went to Bearpit Karaoke.  Run by an expatriate American, you basically have a thousand people on a hillside watching people sing karaoke songs. 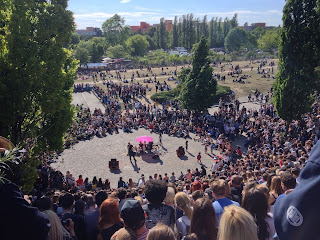 A few sing well (there was one girl from San Diego with a squeaky voice who just rocked  the song "Rolling in the Deep").  Others make up for talent with enthusiasm.  This guy did his best to channel Celine Dion:


We watched the show for over an hour and then wandered through Prenzlauer Berg.  I wanted to make reservations for dinner for Tuesday night (for 14 people).  I was a little nervous (the guy taking the reservation told me to relax), but I did find out that I'll have to bring plenty of cash as they don't take credit cards.  It's a restaurant not that far from Eberwalderstraße and I like it a lot as it's a very traditional, German restaurant, with good and reasonably priced food.  I thought it would be a good introduction to Germany and they have a Spargel (asparagus) menu!

After that we went down to Senefelderplatz for pizza at the anarchist restaurant I like.  On the way back we saw people tangoing at a cafe on the banks of the Spree, while other sat out in beach chairs enjoying the last glimmers of twilight (at 9:30 pm). 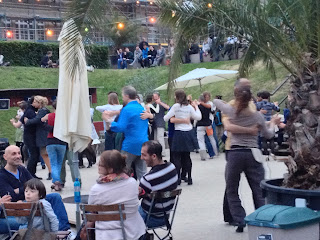