Back to the Archives

Yesterday afternoon I had a pleasant conversation with two Israelis staying in the hostel; they're part of the large ex-pat Israeli community in Berlin.  Neither wants to live here permanently, but perhaps just for a little while.  We talked for about an hour, all in Hebrew, so I've probably spoken more Hebrew than German so far.

I kind of lost track of time, so I raced out around 6:15 pm to pick up the first student, who arrived at Schönefeld, the old Soviet airport in the south of Berlin.  What a schlep!  The drizzle stopped and I did get a wonderful shot of this rainbow over Berlin: 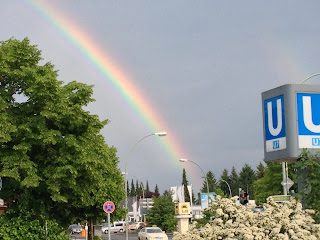 I'm glad I gave myself a little extra time as they train to the airport seemed not to be running.  I changed to a direct bus and got there as the student's plane was landing.   What a decrepit airport!  Very sad and depressed.  Tegel may be a little old and run down, but it's far friendlier.  Terminal C at Tegel is very, very similar in layout to Schönefeld, but Tegel has nice cafes and stores; Schönefeld just feels like a mostly empty warehouse, with a food stall (singular).  The decor looks like it was last updated in 1982.

Found the student with no difficulty and guided her back to the hostel.  After checking her in, we went for dinner in the neighborhood.  When I'm in central Europe, I go on a beer and torte diet.  Here's the first beer of the trip: 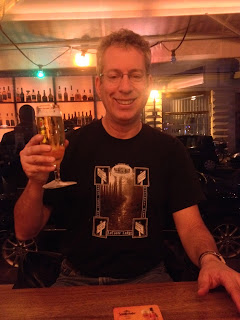 After dinner I was ready to crash.  I returned to the hostel, typed up yesterday's entry and went right to bed.  I figured I would sleep right through to morning, but that was not the case.  As a result of the jet lag, I slept quite fitfully.  When I woke up at 4:45, I took half an Ambien and slept 'til 8:45. 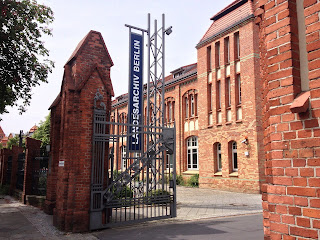 No problem finding the archive or getting in.  They had a microfilm machine ready for me with the microfilm I requested.  I eventually found the document I was looking for:  a copy of the verdict against the lyricist I'm studying, laying out the crimes he was convicted of.  It's rather chilling and even embarrassing to read his dating habits reduced to criminal terminology. One hour and 14 Bundesarchiv (the government archives) in southern Berlin.  Not sure exactly what they have; they only replied to my email yesterday morning and I had to print out the forms I am to bring this afternoon.

Since I had some free time, I went to the Hauptbahnhof to buy the metro passes for the students (when you're buying 14 week-long metro passes at 29 Euros each, it's probably better to do the transaction with a live person).  It was almost sunny, so I decided to go for a walk.  When the weather gets warm, Berliners create their own "beach" along the Spree River. 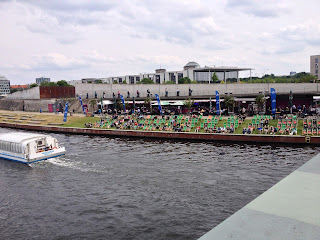 The boat tours go up and down the Spree from opposite Museuminsel.  If you look above the beach chairs, but below the federal government buildings, you make out a line of segways, who appeared to be on a group segway tour of the center of Berlin.

From there I walked to the Brandenburg Gate, where they are setting up a big podium and platform for some event next week.  All day long, I've been seeing people dressed in yellow and black t-shirts and sweatshirts around the center of Berlin.  They're here for the finals of the German soccer season:  Dortmund vs Wolfsburg tomorrow afternoon.  Almost everyone I saw was supporting Dortmund. 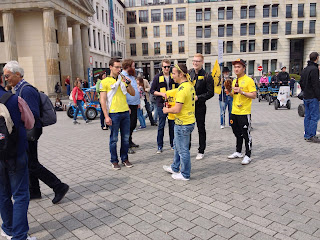 After all that walking, I decided to get back to work:  by going to Café Einstein on Unter den Linden.  This has a rather different feel from the original location near Nollendorfplatz.  A lot more diplomats and high-priced executives come here. 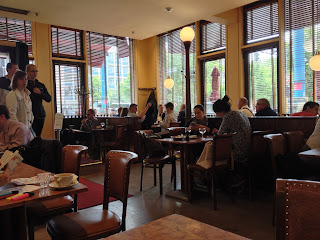 I had brought a copy of a poem written by Bruno Balz in 1927 for the 8th anniversary of the founding of the Bund für Menschenrecht, a very early gay rights organization.  In February 1934, the Schweizerisches Freundschafts-Banner reprinted it on its cover, on the one-year anniversary of the Nazis coming to power.  Called "Wir Wachen" (We Awake), it is (literally) a call to arms to defend freedom.  My goal for the afternoon was to translate the poem (and have a café au lait and a slice of Käsekuchen): 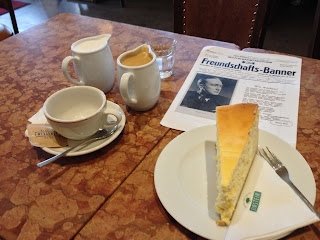 That's Balz's photo on the cover along with his poem.  It took no small amount of courage for someone so prominent to take so public a position.  Here's how the poem opens:

Still, the cry of despair rings out:
“We cannot bear it any longer!”
Yet while we are still not free,
Neither are we beaten!

This was published just three months after one of Balz's most famous successes: the original 1933 Viktor und Viktoria (more famously remade in 1982 by Blake Edwards with Julie Andrews). Balz wrote the lyrics and some of the sung dialogue within the film.

Tonight I went back to Tegel Airport to meet the second student.  I waited in the main hall 'til the board showed his plane had landed. 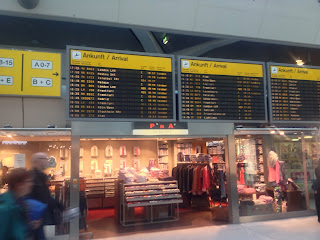 Although delayed, his plane finally landed and his baggage came through.  A much less eventful bus ride back to town.  His hostel and my hostel are just two buildings apart, so we ended up eating dinner between them.  First schnitzel of the trip: 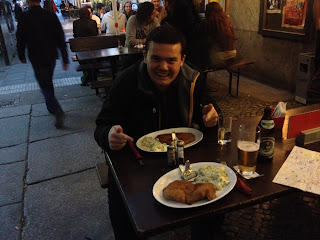 Tomorrow I'm going to try to get to Potsdam.  I haven't seen the Sans Souci Palace since 2007.