The travel day east always hits me hard. It's one of the reasons I head over before the students: so I can be fully rested by the time they arrive.
Thank God, but I didn't fly "screaming baby airlines." l had high hopes for a good night sleep, but as I tried to drift off, I realized that behind me were two American girls in their mid-twenties who really wanted to gossip about a friend of there's. While all the lights were turned down and everyone else was trying to sleep, they happily yakked and yakked. What made it particularly annoying is that I couldn't make out what they were saying, only that they were saying it.
Eventually I put on the headphones and started looking for some music that could serve as white noise. All the meditation stuff started with a calm voice in German telling me to relax. I didn't find that relaxing. Eventually I found something soothing when my neighbor decided to read his novel. I put on my eye patch.
I had finally drifted off to sleep when I felt someone poke me. I realized it was my neighbor: his girlfriend needed to pee. Sigh.
The two girls behind me were still going strong. I managed to fall back asleep, and I think I might have gotten 3 hours of sleep altogether.
Frankfurt Airport really hasn't changed since I was here last year. It's still better than most American airports, though it's also rather charm free.
Berlin Airport is better. Not because it's newer; it clearly shows its age. I just love the fact that the baggage claim is right at the gate and that customs is just beyond that. In five minutes, I went from the plane to the terminal.
I seem to have arrived at the tail end of a heat wave. Yesterday it was 42, today the high was 36, and tomorrow the high will be 29. More like it.
Had no trouble finding my pension; I've been staying here since 2006. Sasha was behind the counter and commented that I haven't been here for a while (not since 2013). The rooms look just the same. 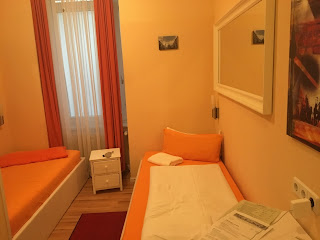 I went for a walk before dinner to try to acclimate to the new time zone. The neighborhood really hasn't changed that much. Part of it is extremely gentrified and part of it is resisting gentrification with all its soul. 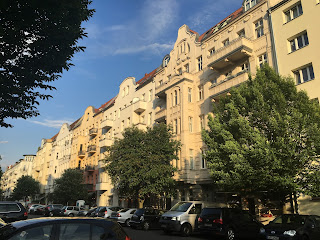 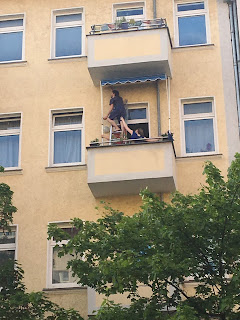 It was a very hot day, so I guess they felt it was time to add an awning.
For dinner, I went to Zum Schusternjungern about 10 blocks away. It was a good walk to and from, and helped burn off the beer, cream of asparagus soup, and the huge piece of schnitzel I had. They had their "Spargel Menu" up. Their menu basically screams "DDR." 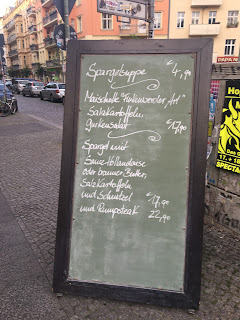 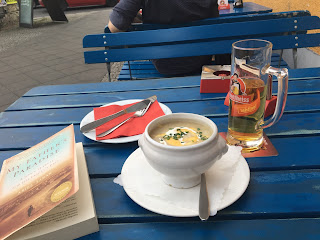